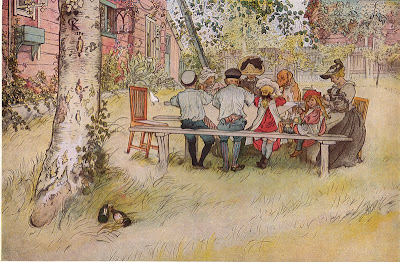 You know the "five-a-day" fruit and vegetable recommendation that is so frequently quoted?   Know where the data for that advice came from?  Apparently someone just made it up.

There is an ongoing (and rather heated) disagreement about the best treatment for Lyme disease.  In Minnesota the state legislature has overruled physicians regarding what some consider to be unproven therapies (especially re long-term antibiotics).

Werner Herzog has been given permission to make a film about the remarkable 30,000-year-old paintings in the caves of Chauvet.  Two videos at the link.

I frankly wasn't aware that Joseph Stalin had a daughter.  Not that it really matters anyway.  But I was surprised to learn that for the last 20 years she has lived in a small town not far from Madison, Wisconsin.  She offers some interesting insights re her father.

Karma is a bitch.  A drunk driver smashed his Chevy Tahoe into a Honda Accord driven by the judge who had excused the man from jail time for a previous DWI offense (granted, there was a long interval between, but still...)

The flicker of compact fluorescent light bulbs may be capable of remotely changing the channels on a television set.

A store clerk scanned the forehead of a girl with the LED light of a price scanner.  "Attorneys for Ms. Juliano and her guardian say the girl was sensitive to light and burned, and later developed post-traumatic stress and Tourette's syndrome."  And the case is actually going to court to waste the time of a jury.  Anyone can sue, but who lets things go this far?

Marilyn Monroe's xrays will be auctioned off to the highest bidder, including a pelvic xray with contrast.  It may be legal, but it's a low-class move, in my view.

A lot of articles have been written about the importance of having robust passwords.  If you're not familiar with the reasons why, read this article at Lifehacker.

When subsidies for generating "green" electricity are inappropriately high, it becomes profitable to buy solar panels and shine conventional arc lights on them and sell the resultant current back to the power company/government.

The "Double Bubbler" water fountain was explained at The Straight Dope 20 years ago.