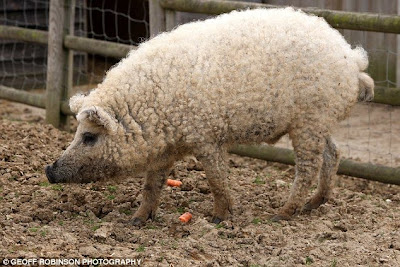 When I started TYWKIWDBI, I wrote 14 posts in a "name that animal" series.   This critter would have fit well into that category, because I have never seen one - even in a zoo.  Pictured above is a curly-coated Mangalitza [Serbian "hog with a lot of lard"], commonly referred to (for obvious reasons) as a "sheep-pig."


‘The woolly coat makes them very hardy and helps them to survive in the harsh winters in their native Austria and Hungary.  In the summer it helps protect them from sunburn.’

The sheep-pig used to be a common sight in Lincolnshire and was shorn once a year to make sweaters, but it became extinct in Britain in 1972...

Hair from the pigs is particularly popular in the U.S. as it retains air bubbles under water making it ideal for tying fishing flies.

At the link there is also a photo of Emma Thompson taking a sheep-pig to a world premier of a movie.