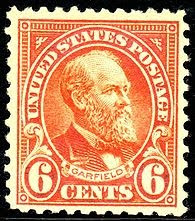 Today is an unbirthday of James A. Garfield, 20th President of the United States, the only sitting member of the House of Representatives to be elected President.

Garfield was assassinated about six months after taking office. "Alexander Graham Bell devised a metal detector specifically to find the bullet, but the metal bed frame Garfield was lying on made the instrument malfunction. Because metal bed frames were relatively rare, the cause of the instrument's deviation was unknown at the time.... Most historians and medical experts now believe that Garfield probably would have survived his wound had the doctors attending him been more capable. Several inserted their unsterilized fingers into the wound to probe for the bullet, and one doctor punctured Garfield's liver in doing so."

Also of interest - while serving in the House of Representatives, he discovered a novel proof of the Pythagorean Theorem.  He was also reportedly ambidextrous and could simultaneously write a passage in Latin with one hand, and Ancient Greek with the other.