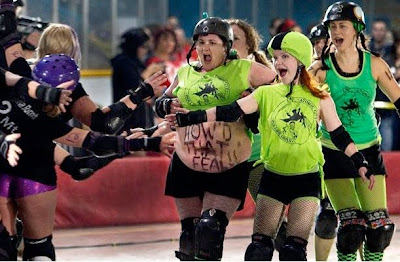 When I saw this photo at the weekly Telegraph gallery, I was going to post it as an example of butchery of the English language, but after further reflection and examination of the caption -

- I decided the misspelling must be intentional.  A quick perusal of Suzy Shameless' page at the website for the Terminal City Rollergirls heightens my suspicion:

There are some other interesting bios there, which I don't have time to pursue now.

Addendum:  A clarification from an anonymous reader -


"Do not worry, Shameless was as horrified as you at the mis-spelling on her beloved belly. She always lets someone have the honour of inking her up, and this time it was one of the gals on the guest team from Tri-Cities, Washington. The American girl later said it was intentional, after multiple people pointed out the error... But rest assured that Suzy Shameless has an excellent grasp on the English language! The look on her face when she called me over in the changeroom to show me what had been done was one of pure disbelief."