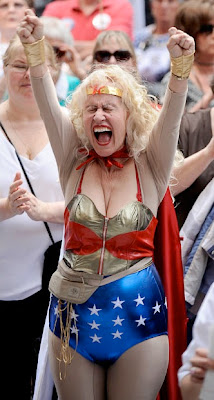 Last week when I posted a report about a Tea Party supporter with ten children who was the recipient of Medicaid funds, I was roundly criticized for choosing an unrepresentative example of the Tea Party constitutency.  So this week I will go out of my way to emphasize that the woman in the photo above is NOT a typical Tea Party member.

Photo credit AP, via The Telegraph.