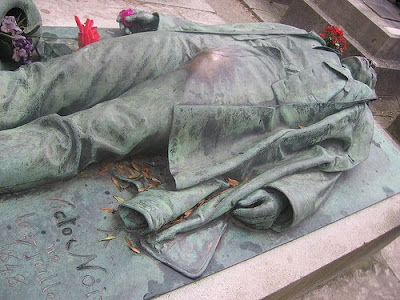 "Angel lust" is postmortem priapism, typically seen in males who have died via strangulation.  That process appears to be depicted in the Parisian monument to Victor Noir.


A life-size bronze statue was sculpted by Jules Dalou to mark his grave, portrayed in a realistic style as though he had just fallen on the street, dropping his hat which is depicted beside him. The sculpture has a very noticeable protuberance in Noir's trousers. This has made it one of the most popular memorials for women to visit in the famous cemetery. Myth says that placing a flower in the upturned top hat after kissing the statue on the lips and rubbing its genital area will enhance fertility, bring a blissful sex life, or, in some versions, a husband within the year. As a result of the legend, those particular components of the oxidized bronze statue are rather well-worn.