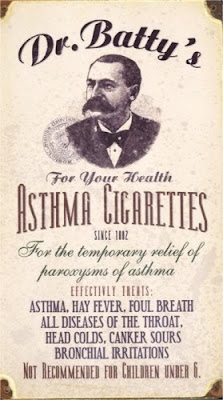 Asthma cigarettes were real and -- theoretically -- effective bronchodilators.  I've not seen the cigarettes, but when I first moved from Texas to Lexington, Kentucky in 1978, a local pharmacy there had on the shelf a product called "Dr. R. Schiffmann's Asthmador" which claimed "to relieve the distress of bronchial asthmatic paroxysms."  The directions say to put a half- to one teaspoon of the powder on a plate and ignite it ("allow sulphur to burn off match") and inhale the vapor or smoke into the lungs.

The active ingredients are stramonium and belladonna, both of which are anticholinergic bronchodilators, but the problem of course would be that the combusion process creates so many other byproducts that are bronchoconstrictors that the resultant inhalation would be a chancy process.

Erowid offers the following comments re the CNS effects:


Asthmador, a physically fine powder, is a nonprescription mixture of belladonna and stramonium; the directions on the package state that the powder is to be burned and the smoke inhaled to relieve bronchial asthma. The mixture contains between .23 percent and .31 percent alkaloids... The patient stated he took no particular care in measuring out one and one-half tea- spoons; he probably ingested between eight and 12 and perhaps as much as 20 mg of hyoscyamine. The description of atropine toxicity in this dosage range includes hyperpyrexia, accelerated pulse, mydriasis, confusion, delirium. hallucinations, exaltation, and bizarre neurological symptoms(2, 5).

Datura stramonium (one of the ingredients of Asthmador), of which hyoscyamine is the principal alkaloid, was used in the Middle Ages in demonology, and to evoke hallucinations. It was smoked by the Arabs and Swahili of East Africa and in the Bengal legion of India in recent times. It has been ingested in the Darien and Choco regions of the Americas, by the Aztecs and by Indian tribes in the southeastern and western United States to evoke hallucinations and for religious and ceremonial purposes...

Image via My Ear-Trumpet Has Been Struck By Lightning.