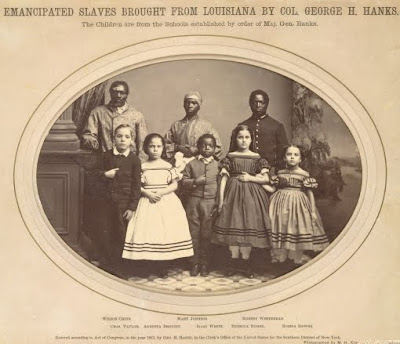 From an article in The Atlantic by Ta-Nehishi Coates, who provides the following explication re the photo:


In honor of Confederate History Month, I present a group of emancipated Louisiana slaves. The following letter was written by Colonel George Hanks, who commanded a Union Corps composed entirely of black troops. Hanks was attempting to raise money for the education of freed slaves...

Rebecca Huger is eleven years old, and was a slave in her father's house, the special attendant of a girl a little older than herself. To all appearance she is perfectly white. Her complexion, hair, and features show not the slightest trace of negro blood...

Rosina Downs is not quite seven years old. She is a fair child, with blonde complexion and silky hair. Her father is in the rebel army. She has one sister as white as herself, and three brothers who are darker...

Charles Taylor is eight years old. His complexion is very fair, his hair light and silky. Three out of five boys in any school in New York are darker than he. Yet this white boy, with his mother, as he declares, has been twice sold as a slave.

These three children, to all appearance of unmixed white race, came to Philadelphia last December, and were taken by their protector, Mr. Bacon, to the St. Lawrence Hotel on Chestnut Street. Within a few hours, Mr. Bacon informed me, he was notified by the landlord that they must therefore be colored persons, and he kept a hotel for white people. From this hospitable establishment the children were taken to the "Continental," where they were received without hesitation.