The redemptive power of manual labor 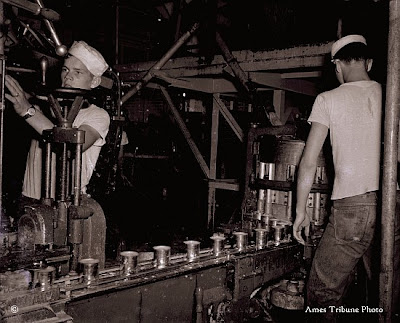 First, an excerpt from another (former) Minnesotan:


When I was hired, right out of high school, to wash pots and pans at a hotel in Minneapolis, I felt real jubilation. After the deaths of James Dean and Buddy Holly, I had adopted a tragic view of life and imagined I'd die in a crash or else become a hobo and wind up destitute, but instead I was paid actual money to run racks of dishes through a machine. It felt princely at the time...

Back in those days, I used to visit relatives on their farm and they always found jobs for me to do. It was not right or decent that a healthy man should sit and stare out the window, so I was allowed to run the manure spreader. I reached back from the tractor seat and pulled the lever that engaged the drive mechanism and the scrapers moved the wet manure to the rear where the big teeth on the revolving drum flung the clods onto the corn stubble. I did this about as well as a person could...

I found my own very first job when I was 16 years old.  An advertisement in the Minneapolis Star Tribune indicated that I could earn $$ in the retail clothing business.  I showed up at a warehouse in downtown Mpls eager to work (for the Northwestern Woolen Company as I remember), was given about one hour of training on the salient points of the merchandise, then was handed a large bag of woolen clothing, which I was supposed to sell door-to-door in midsummer.  The company thoughtfully provided an alcoholic man to drive a bunch of us kids to a neighborhood and drop us off.

I remember sweating in the heat, lugging that bag from house to house and trying to convince people that the parkas were good bargains and that the socks were guaranteed never to develop holes.  I remember pleading with people for permission to drink water from their hoses and being turned down.  After the first week I sat down with my mom and told her I had earned $5.00 in commissions in 5 days, had spent $5.25 parking the car downtown, and was therefore losing a nickel a day.  We agreed that I could do better than that elsewhere.

Her solution was to drive me down to a southern Minnesota town called Le Sueur - home to one of the big processing plants of the Green Giant company.  She remembered that when she was a child, some of her friends' first jobs (in the 1930s) were at that plant.  I just showed up, walked in, and they gave me a job at minimum wage (I think $1.50 per hour as I remember) operating the cooker machines.  Mom found a room for me on the upper floor of an old lady's home in town, then drove back to Minneapolis; she would be back to pick me up in a month.

With zero background re machinery, I was at a total loss, but was taken under the wing of an old man who had worked the cooker machines for decades.  What we did was sit on a pair of wooden chairs for 12 hours and watch the conveyor belts which brought the cans from the canning room upstairs to the cooking room.  We had to watch for dented cans because sometimes the canning machines would slam the top on crooked, and if a dented can reached the cooker it would jam, and cans would start backing up.  Dented cans arrived at irregular intervals; sometimes singly, sometimes in a parade, and we would rush from our chairs, climb ladders to the appropriate point to intercept the cans and start throwing them on the floor.

The other part of the job was to grease the cookers.  I was instructed on the fine points of operating a grease gun and shown where all the appropriate nipples were for I think three large cookers in the room.  I believe we also checked the pressure and temperature gauges.  There was a particular odor associated with the room; not a bad one, and not a food one.  As I remember, it was the smell of hot grease, and I kept a rag in my pocket to wipe the grease gun and my hands.

Twelve hour shifts.  Seven days a week.  Unless it rained.  If it rained, the trucks couldn't get into the fields to harvest the peas (early in the season) and the corn (the following month).  If the trucks couldn't go out, the produce couldn't be processed.  And you didn't work.  And didn't get paid.  Anything.  So on rainy days you just sat in your room and read books and listened to the radio.

The photo embedded above is the only one I was able to find of a Green Giant packing plant, from a different town and an earlier decade (1957), but essentially identical to when I arrived in 1962.

Strong, vivid memories that will last until I'm an old man.