Laki volcano and the Deccan Traps 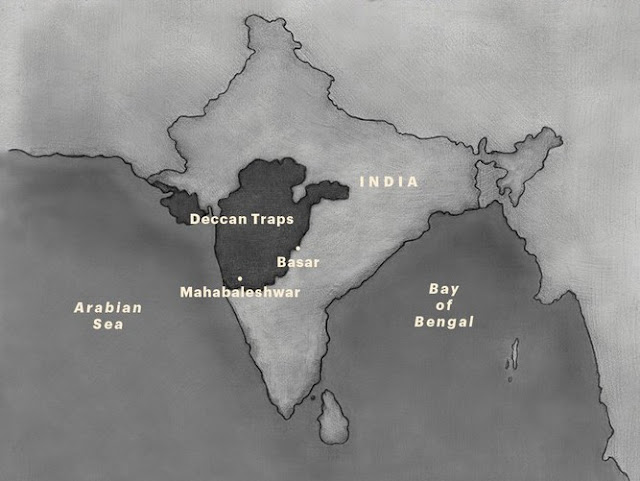 "On June 8, 1783, Iceland’s Laki volcano began to smoke. The ground wrenched open “like an animal tearing apart its prey” and out spilled a “flood of fire,” according to an eyewitness’s diary. Laki let loose clouds of sulfur, fluorine, and hydrofluoric acid, blanketing Europe with the stench of rotten eggs. The sun disappeared behind a haze so thick that at noon it was too dark to read. (Unlike the cone-shaped stratovolcanoes from third-grade science class, both Deccan and Laki were fissure eruptions, which fracture the Earth’s crust, spewing lava as the ground pulls apart.)

Destruction was immediate. Acid rain burned through leaves, blistered unprotected skin, and poisoned plants. People and animals developed deformed joints, softened bones, cracked gums, and strange growths on their bodies—all symptoms of fluorine poisoning. Mass death began eight days after the eruption. More than 60 percent of Iceland’s livestock died within a year, along with more than 20 percent of its human population. And the misery spread. Benjamin Franklin reported a “constant fog” over “a great part of North America.” Severe droughts plagued India, China, and Egypt. Cold temperatures in Japan ushered in what is remembered as the “year without a summer,” and the nation suffered the worst famine in its history. Throughout Europe, crops turned white and withered, and in June, desiccated leaves covered the ground as though it were October. Europe’s famine lasted three years; historians have blamed Laki for the start of the French Revolution.

“But that’s just a short-term event from a relatively minor eruption, compared with Deccan,” Keller told me. A single Deccan eruption was “thousands of times larger” than Laki, she said. “And then you repeat that over and over again. For basically 350,000 years before the massive die-off.”

Laki released 3.3 cubic miles of lava; Deccan unleashed an estimated 720,000 cubic miles, eventually covering an area three times the size of France. It took us five hours of driving, an hour-and-a-half flight from Hyderabad to Pune, and another three hours in the car to trace the lava flows from some of their farthest, flattest reaches back to some of their highest points, in Mahabaleshwar, a vertiginous town crowded with honeymooners. Mountains of basalt 2.1 miles high—nearly twice as tall as the Grand Canyon is deep—extended as far as I could see. Even the geologists, who had visited the Deccan Traps multiple times before, gaped at the landscape.

The above excerpted from a very interesting 2018 Atlantic article presenting the argument that the extinction of the dinosaurs was not caused by the asteroid impact at Chicxulub, but rather by prolonged volcanic activity.  Those interested should visit the link.

I had to look up "Deccan Traps."


The term "trap" has been used in geology since 1785–1795 for such rock formations. It is derived from the Swedish word for stairs ("trappa") and refers to the step-like hills forming the landscape of the region.

The Deccan Traps are a large igneous province of west-central India (17–24°N, 73–74°E). They are one of the largest volcanic features on Earth. They consist of multiple layers of solidified flood basalt that together are more than 2,000 m (6,600 ft) thick. 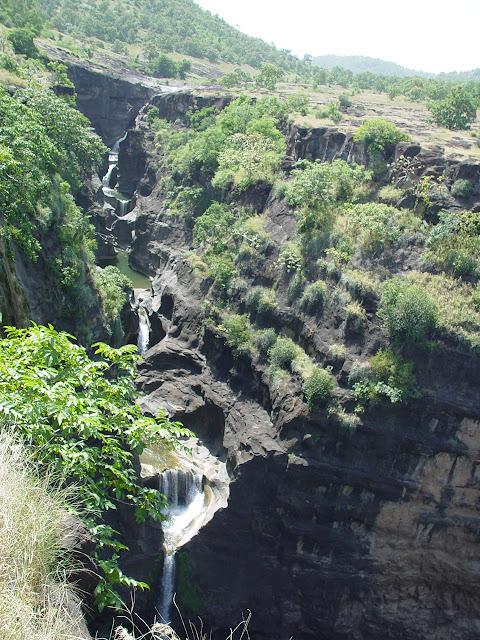