Exploring the life and mind of Samuel Johnson 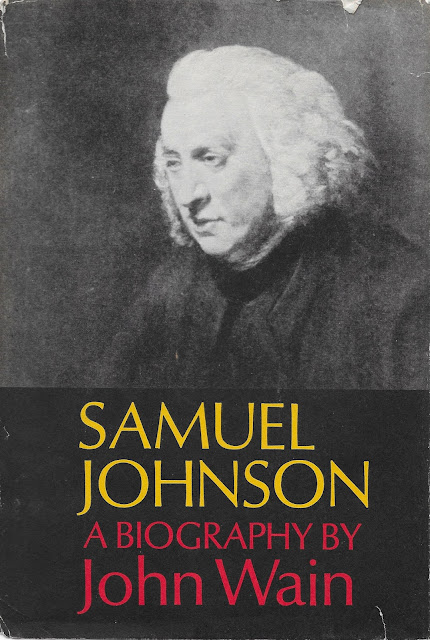 It has been many decades since I have read, seen, or heard anything at all about Samuel Johnson (other than the delightful Blackadder sketch about his dictionary).  This biography has been on my shelf a long time, so I decided to give it a quick read and extract the best bits for the blog.


"... as Johnson was neither the first nor the last to discover, one can have an honourable literary reputation and still be a poor man.  Several sketches of his appearance and habits date from this time [1760s], and they all agree as to the shabbiness of his attire and the discomfort of his surroundings...

Johnson had lived for so long without the conveniences of life, even without many of its ordinary decencies, that he had accustomed himself to very modest demands.  Broken furniture, dusty books, his meals taken at some chop-house round the corner and his social life at other people's houses or in a tavern - all this had come to seem normal.

Johnson's attitude to the study of history was much the same as Tolstoy's.  The mere scribble of historical fact and anecdote irritated Tolstoy into that entertaining grumble quoted in Sir Isaiah Berlin's The Hedgehog and the Fox:

"History is nothing but a collection of fables and useless trifles, cluttered up with a mass of unnecessary figures and proper names.  The death of Igor, the snake which bit Oleg - what is all this but old wives' tales?  Who wants to know that Ivan's second marriage, to Temryuk's daughter, occurred on 21 August 1562, whereas his fourth, to Anna Alekseyevna Koltovskaya, occurred in 1572...?"

Although Johnson was no friend to the only major revolution that occurred in his day, the American War of Independence, he was... fully convinced of man's right to rise in arms against an intolerable yoke. His generous indignation was aroused by any authority which, however legitimate its basis in legality, abused its power at the expense of the people who were helpless in its grasp.  His blood boiled when he thought of the slave trade.  He once silenced an Oxford dinner-party by holding up his glass and saying, 'Here's to the next insurrection of the Negroes in the West Indies!"

This humanitarianism was at the root of his distrust of colonial expansion.  Writing to a friend - an American friend, incidentally, Dr. Samuel Johnson of Connecticut - he mentions the news of a voyage of arctic exploration, and adds, 'I do not much wish well to discoveries, for I am always afraid they will end in conquest and robbery.'  The red man was dispossessed, the black man enslaved, nearer home the Hebridean crofter was starved into emigration, for no morally justifiable reason but merely because the minorities to which they belonged had no economic or military power.  This detestation of expansionist colonial adventuring, which he saw simply as armed robbery, was a consistent position of Johnson's through the years...

Just as Johnson hated the 'conquest and robbery' inherent in colonialism, so he hated the repressive injustice of the eighteenth-century penal system.  Though all should be equal before the law, the poor and ignorant man, then as now, always saw a harsher face of the law than the comfortable and educated; this too, Johnson condemned...

If I had to fix upon one word that would convey the heart of Johnson's attitude towards man in society, I would choose 'compassion.' He wanted an ordered, hierarchical society because he loathed the thought of the kind of scramble in which the weak inevitably go down.  That, with rule and restraint weakened, society would be a cut-throat business was an assumption he made on the basis of his observation of human nature, including his own.  Man was not, to Johnson, inherently gentle and unselfish.  On the contrary.  he was a creature full of anarchic and ravening instincts, which had to be controlled by the exercise of discipline both from within the individual and from without...

Johnson, sickened at the thought of war and what it does to its victims, detested the warmongering profiteer and attacked him in some pages of invective...

"It is wonderful with what coolness and indifference the greater part of mankind see war commenced.  Those that hear of it at a distance or read of it in books... consider it as little more than a splendid game... Some indeed must perish in the most successful field, but they die upon the bed on honour, resign their lives amidst the joys of conquest, and filled with England's glory, smile in death.

The life of a modern soldier is ill represented by heroic fiction.  War has means of destruction more formidable than the cannon and the sword.  Of the thousands and ten thousands that perished in our late contests with France and Spain, a very small part ever felt the stroke of an enemy; the rest languished in tents and ships, amidst damps and putrefaction; pale, torpid spiritless and helpless; gasping and groaning unpitied, among men made obdurate by long continuance of hopeless misery; and were at last whelmed in pits, or heaved into the ocean, without notice and without remembrance.  By incommodious encampments and unwholesome stations, where courage is useless, and enterprise impracticable, fleets are silently dispeopled, and armies sluggishly melted away."

The one fact about Johnson's political opinions that 'everybody knows' is that he was against American independence... But then we see a very different America from the one Johnson saw.  We see an America transformed by wave after wave of total change... And we have seen the climb of America to colossal, world-dominating wealth and power.  To imagine that such a country might remain tied to the apron strings of England would be hilariously absurd.  But Johnson looked not at the future but at the present.  What he saw was a large empty country in which a tiny handful of planters were growing rich by lashing the backs of slaves.  "Why is it," he demanded, "that we hear the loudest yelps for liberty from the drivers of Negroes?"

To Johnson, the American settlers were Englishmen living abroad who refused to pay taxes to the home government.  This, in itself, he considered an unbearable effrontery... While refusing to pay taxes, the colonists nevertheless continued to accept the protection of British naval power.  It has always seemed to me that Johnson had a real point here.  No country in history has gone through its teething period with so little interference from outside as the United States.  During the century and a half in which the country grew up, the possibility of foreign invasion was simply not a problem.  And the reason, or one of the reasons, must surely be the  thoroughness with which the British Navy policed the North Atlantic.

This book offers a comprehensive analysis of Samuel Johnson's life, and although I have included it in the recommended books section of TYWKIWDBI, it's just too much information for the casual reader.  But for those who may have enjoyed reading about Johnson and his dictionary, and his Rambler essays in Boswell's Life in their collegiate curriculum, this book utilizes resources unavailable to Boswell in order to fill in the other details about Johnson's early life, his unusual relationship with Hester Thrale, and his illnesses and death.