Thoughts about a bird's nest 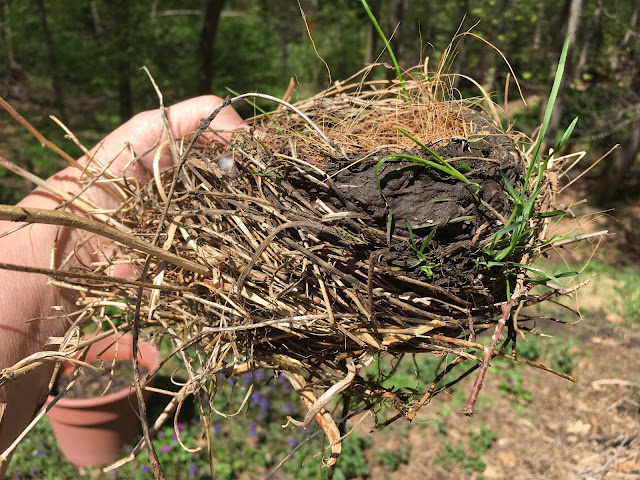 I was out doing yard chores the last week of May and found this on the ground under a tree.  We had had thunderstorms the night before, and it was obvious that this bird nest had been dislodged.  This was an unusually impressive nest, in part because of its robustness, as evidenced by that mass of mud which must have included some seeds that had begun to sprout.

Based on our local avifauna, I recognized it as the nest of an American robin (Turdus migratorius) (I know you're giggling; turdus is Lain for "thrush.")  We see these all the time, because these birds have no fear of nesting close to human activity.  Almost every year a robin will build a nest on the rafter supporting our back deck, and once on top of a unused rain barrel under our screen porch: 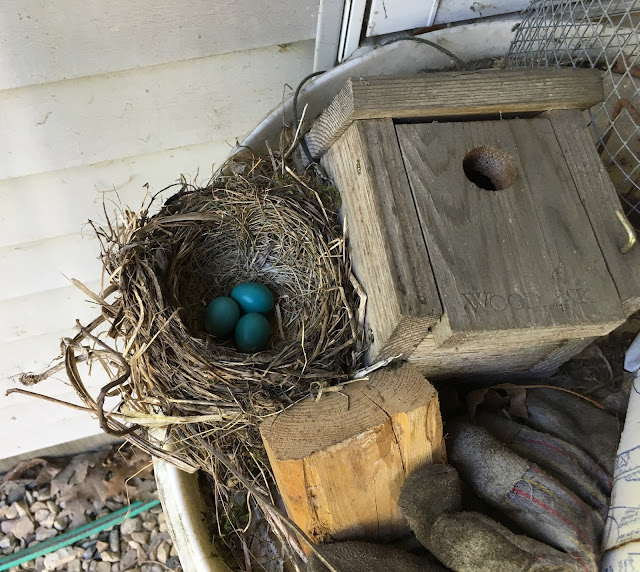 But back to this year's windfall nest.  In addition to its mass, I was impressed by the construction.  In addition to the mud, there was lots of dried plant material.  On the outside were bits of straw from a bale of marsh hay that we used for garden mulch (also used a previous year for the nest in the photo above).

But in addition, this robin had incorporated a layer of light brown coconut fiber on the interior surface, which she had extracted from a fiber mat that had been placed on a hillside between the back yard and the woods as part of a reseeding and anti-erosion project: 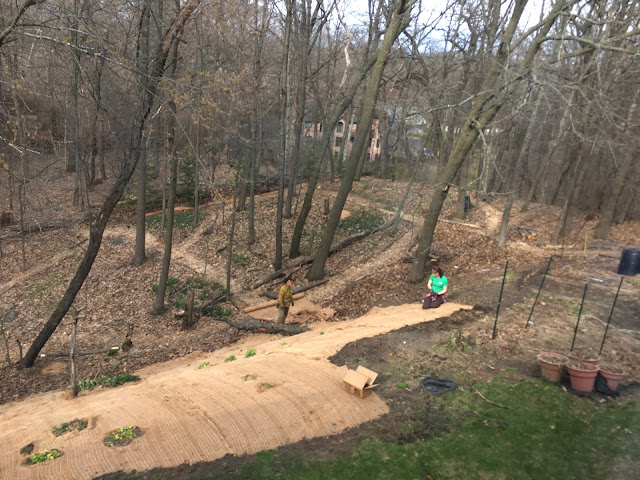 The result was a sturdy nest with a comfy interior lining: 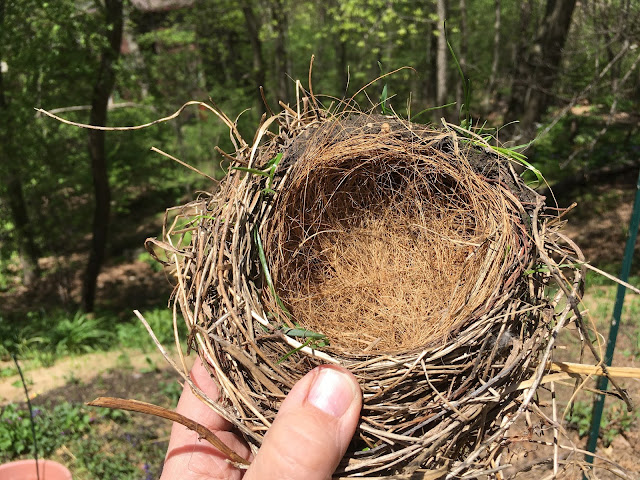 Very impressive.  Top marks to this robin.  I bet it's fair to assume that this particular nest was built by an experienced robin (or pair of robins) who have built a nest or two in the past, and now can incorporate new material into their template.

But what I can't quite sort our is how the robin learned nest construction in the first place.  They are born in one, so may have seen relevant materials as a nestling, but they never saw one being built.  And of course there are all sorts of different types of nests depending on the species.

I'm not the first person to ask this question, but I don't ever remember seeing a useful answer.  It's always attributed to "instinct" - which means inherited knowledge.  All living creatures have instincts and reflexes, including humans.  Some of that knowledge resides in whatever part of our brain is the "reptilian" bit.  We retch as a response to the smell of Pseudomonas aeruginosa because early primate ancestors connected that odor to unhealthy rotting food.

So the question that stayed in my mind for the rest of the day was this:  if humans inherit knowledge from parents and ancestors, is it conceivable that such knowledge could be something as specific as musical skills, language skills, fine motor skills?  Can a savant or a phenom of the arts be "channeling" an ancestor with extraordinary development in that area?

I don't expect to find an answer, but I welcome anyone's thoughts in this matter.

To finish with the robin family.  Several days later as I walked out the driveway to the mailbox, a  robin flew out from shrubbery next to the pole of our security light.  I reached in with my phone and clicked away until I got this image: 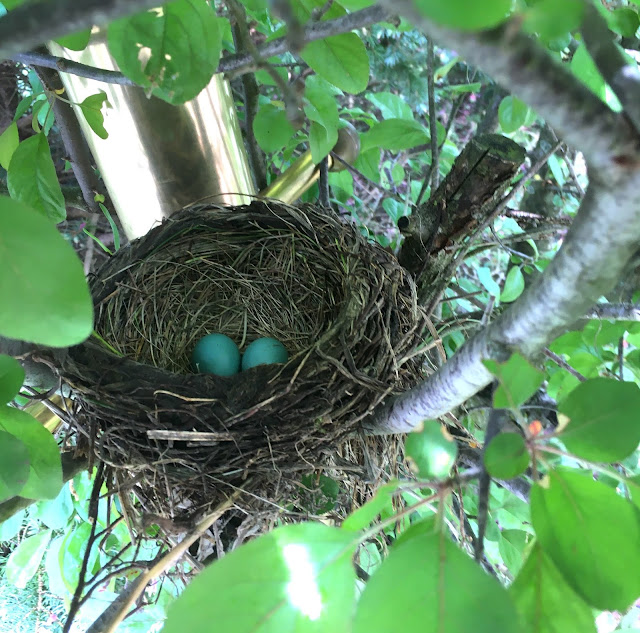 One of them survived... 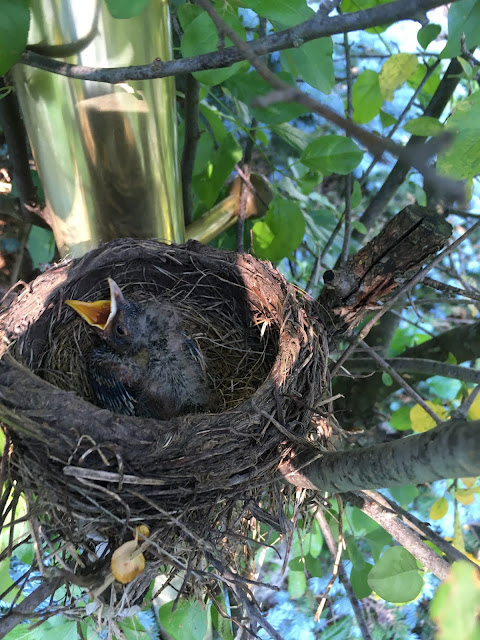 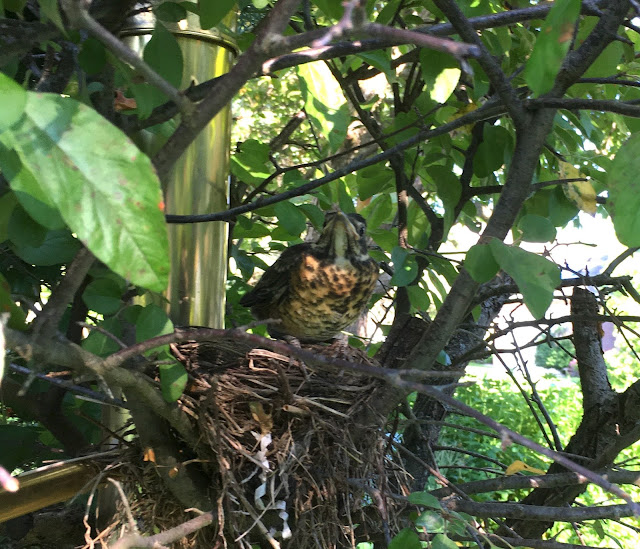