Found on a Michigan farm 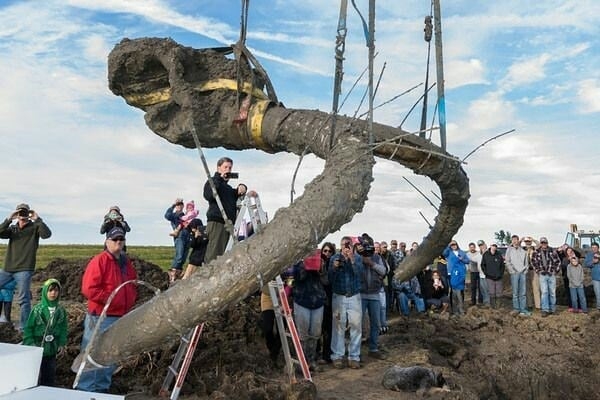 Last Monday, farmer James Bristle and his neighbor were digging a trench to install a drainage pipe in his wheat field on the outskirts of Chelsea, Michigan, when their backhoe suddenly struck something hard about eight feet underground. At first, the pair thought they had hit a buried piece of wood, perhaps a fence post, but they soon realized they had uncovered something neither had ever seen before—an enormous three-foot-long bone...

Using zip lines attached to a backhoe, the paleontologists carefully hoisted the mammoth’s gigantic skull and tusks and placed it on a flatbed trailer along with the skeleton’s vertebrae, ribs, pelvis and shoulder blades before filling in the pit...

The mammoth’s remains still need to be dated, but Fisher said the bones are from an adult male that likely lived between 11,700 and 15,000 years ago and was in its 40s when it died. The paleontologist said the specimen was a Jeffersonian mammoth—a hybrid between a woolly mammoth and a Columbian mammoth named for founding father Thomas Jefferson, who had a keen interest in paleontology.

Fisher noted there was “excellent evidence of human activity” associated with the mammoth remains, and he theorizes that ancient humans carved the animal and submerged the carcass in a pond to preserve the meat for later use. “We think that humans were here and may have butchered and stashed the meat so that they could come back later for it,” he said. The evidence included three basketball-sized boulders found with the remains—which may have been used to weigh down the carcass—a stone flake resting next to one of the tusks that could have been used as a cutting tool and the positioning of the neck vertebrae in correct anatomical sequence as opposed to a random scattering that normally happens after a natural death.

And this related material via Neatorama:


Mammoths lived on North America's mainland until about 10,000 years ago, but they survived in two places for much longer: St Paul Island and Wrangel Island, in the Russian Arctic, where teeth have been found that are only 4,000 years old...

St Paul is a volcanic island that until around 9,000 years ago was connected to the mainland by the Bering Land Bridge, which enabled animals to roam freely to and fro.

Dr Shapiro warns the isolation that killed the mammoths on St Paul is threatening other species and biodiversity today.

"Islandization takes different forms where the habitats that we've chosen to protect are surrounded not by water, but by other things like farms and agriculture."

It's striking to realize that 4000 years ago (2,000 B.C.) would be contemporaneous with pharaohs ruling Egypt, the cuneiform alphabet, Stonehenge, and the Chinese Bronze Age.