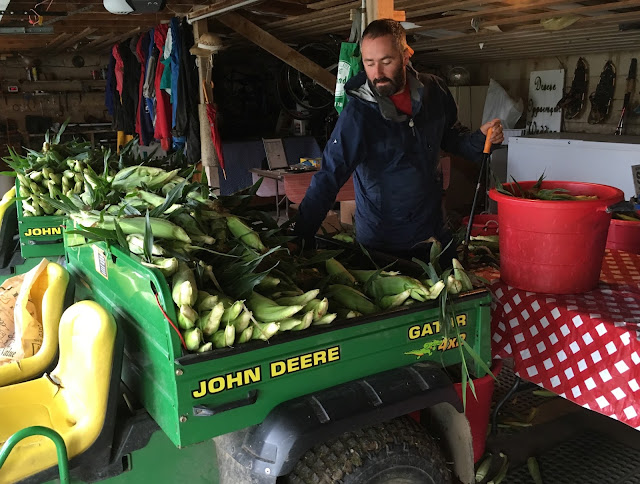 "Dandelion wine. The words were summer on the tongue. The wine was summer caught and stoppered."    --Ray Bradbury, Dandelion Wine

For Ray Bradbury, summer was preserved in dandelion wine.  Here in Wisconsin and Minnesota, we preserve summer in freezer corn.

The first step is an early morning visit to a local farm.  They harvest at sunrise and bring it into a barn for processing.  Modern sweet corn is incredibly sweet - much more so than the strains of corn I grew up with 50-60 years ago.  And modern corn holds that sweetness longer, before the intrinsic sugars start turning into starch.  Even so, it's best to obtain, prepare, and eat the corn as soon as possible after it's harvested.  Throughout the summer we go to this farm once or twice a week. 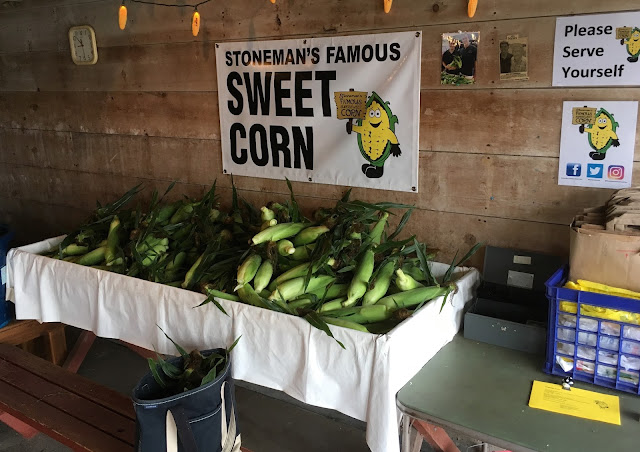 After the shank is chopped and the ear is inspected (top photo), the corn is moved to a self-serve table, and then it's first-come first-served until they run out.  The entire process is done on the honor system.  You take what you want, figure the cost from a chart on the wall (it's about 50c/ear), put your money in the open cashbox and take change if you need it.  Grocery bags are provided, but most people bring their own reusable ones.

Here's the recipe for freezer corn, which is of course a bit different from the heat-and-eat process for regular corn-on-the-cob: 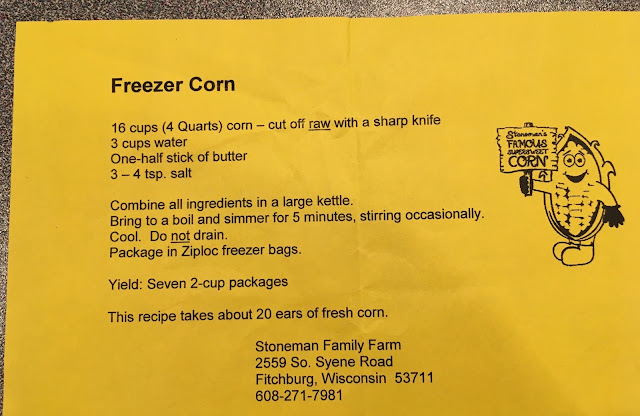 The Stonemans grow a supersweet bicolor corn.  The ears were a little smaller this summer because of unusually cool temperatures during the growing season. 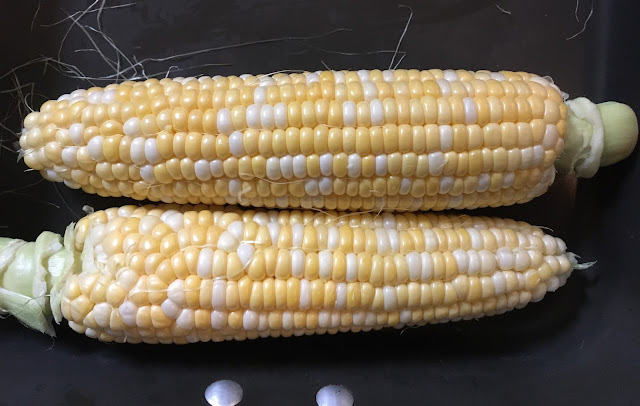 We process about two dozen ears for the freezer, first cutting it off the cobs out in the garage (it can be messy, with kernels and juice flying around).  Note at this point the kernels are ready to eat - and very sweet. 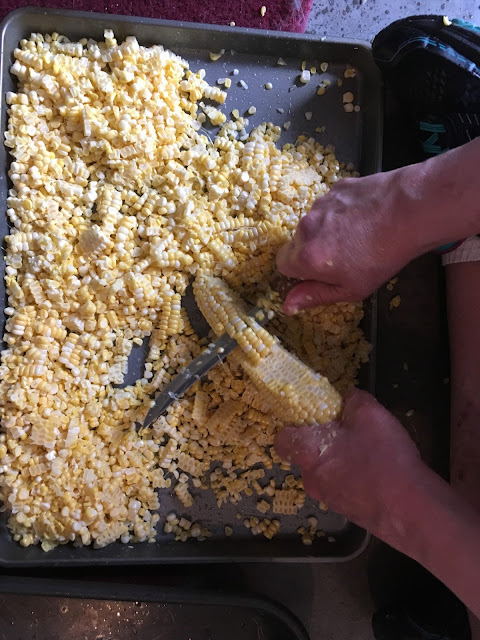 Then to the kitchen to be processed according to the directions in the third photo above. 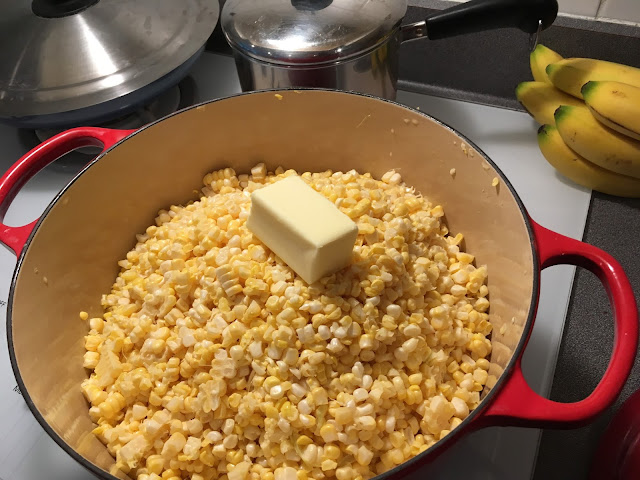 And finally packed in Ziplock bags and stored in the freezer next to the other essential food groups... 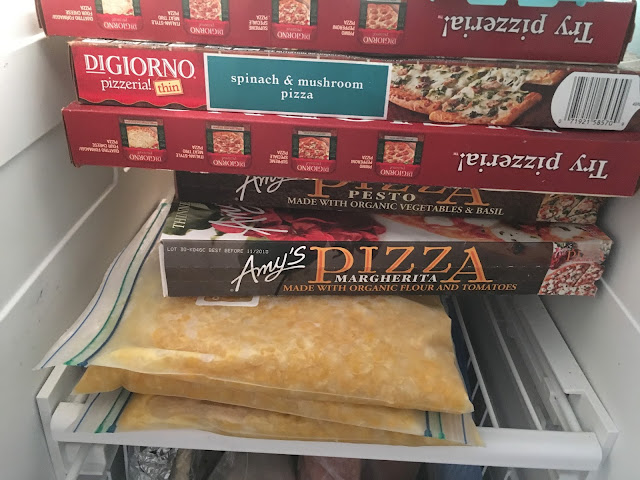 Reposted from last fall to remind locals that Stoneman's is open and has the season's first crop available.  The heavy rains this spring delayed planting, so several of the fields are a week or two behind schedule.  Best to visit their Facebook page to check availability before driving out.

Re-reposted for the same reason.   First corn of the season available this morning is yellow sweet corn; the bicolor should be ready by next week.

Addendum - adding a photo of one ear of the bicolor. 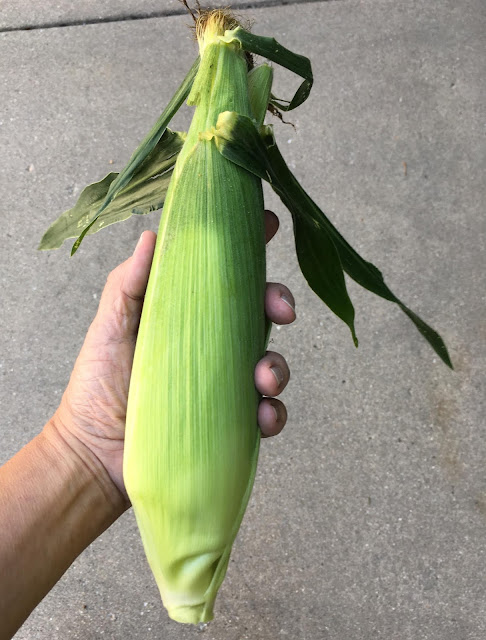 Husked and ready for the microwave: 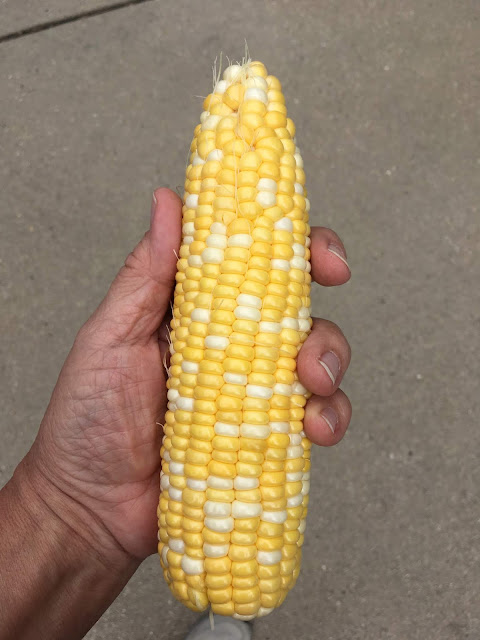 Reposted to remind neighbors and locals in the Madison area that the season has started.  This morning the Stonemans have the yellow corn, which grows faster than the supersweet bicolor, which will be ready for harvest next week.

Social distancing is applicable at the shed, so better to bring exact change ($8 for baker's dozen).  You can still bag your own from the pile on the table, and bags are available for those who don't bring their own.

Best to go early in the morning (they open at 8).  Yesterday they sold out their day's harvest of a hundred dozen ears before noon.
Addendum: Here is a remarkably informative video from America's Test Kitchen: