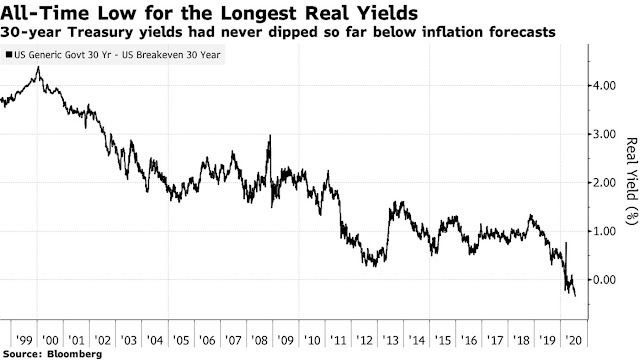 From a July 23 article by John Authers at Bloomberg.  Depicted are "real yields" on 30-year treasuries, graphed over the past 20 years.  This is not the "nominal" yield the treasury is issued at, but the yield adjusted for expected inflation.


In markets, there was a major landmark in the 30-year Treasury bond market. The real yield (accounting for inflation) hit the lowest ever in the period that inflation-protected bonds have been available. They now carry a negative yield that has dropped below its low from the crisis period back in March.

This implies acute problems for anyone trying to manage money for the long term, such as pension fund managers, as the cost of buying a guaranteed income becomes prohibitive. And the fact that people are prepared to lend to the government for such a long period while expecting a negative real return implies great negativity...

It isn’t a V-shaped recovery. Covid has seen to that. The weakening dollar and record low bond yields make life easier for the U.S. and its policymakers, but the risk of a mistake, and of a solvency crisis to hit later, are real. Until these immediate policy issues are resolved, risk aversion will probably stay high, while confidence in the U.S. stays weak.

During the very, very early stages of the pandemic (March), I listened to an interview with John Authers, who offered what I view as the most perceptive comment on the economic effects of the pandemic that I have heard yet.  During the questioning he was asked "What are we misunderstanding about this virus and the effects on the markets?  Are we underestimating the depth of the market drop?  Are we underestimating the duration?  What are we not seeing?"

I'll have to paraphrase his response, because I seem to have lost the link.  He said that what nobody seemed (at the time) to understand is how much this viral pandemic will change the world.  That it would alter not just short-term profits, but human and corporate behavior on where people live, what they buy, whether they travel, how they save, how they plan their futures.

I think his prediction is still playing out.

Addendum:  Correction (found the link) - it wasn't John Authers, it was Mohammed El-Erian who offered that assessment in an interview with Jonathan Ferro back on March 27.