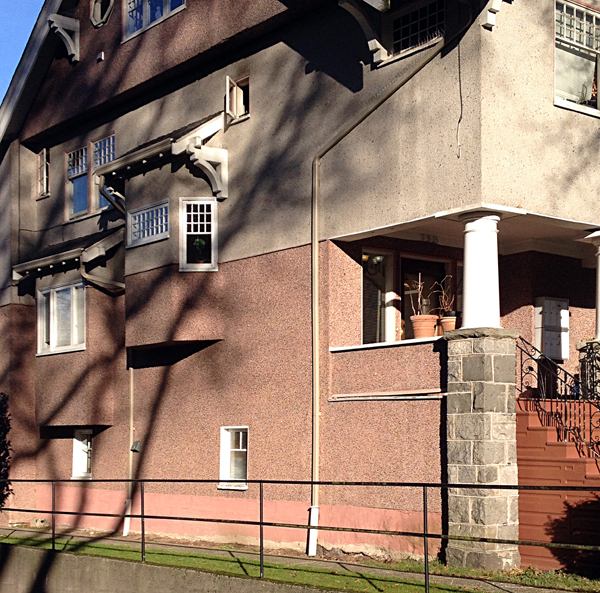 Saw a gif today of a man applying pebbles to a wall, so I tried to look up pebble-dash and found an interesting article on bottle-dash:

If you are not familiar with what it is, houses with bottle-dash (unlike pebble-dash) have bits of glass (most often brown beer and green pop bottles), instead of the more commonly used rock bits, embedded in the exterior stucco finish. I have been curious about bottle-dash stucco since I was a child and first saw it on my great aunt’s house in East Vancouver.  Back in the 1970s and into the 1980s, it was quite common to see it on Vancouver houses of a certain era...

In the early days the aggregate for dashes was mostly just simple beach or river gravel. In the earliest example of this style of finish, one can occasionally find sea shells, crab legs and other such bits. Starting as early as the mid 1930s more refined crushed rock (like white quartz and black obsidian) was used to impregnate the surface. This style of finish is known as pebble or rock dash... 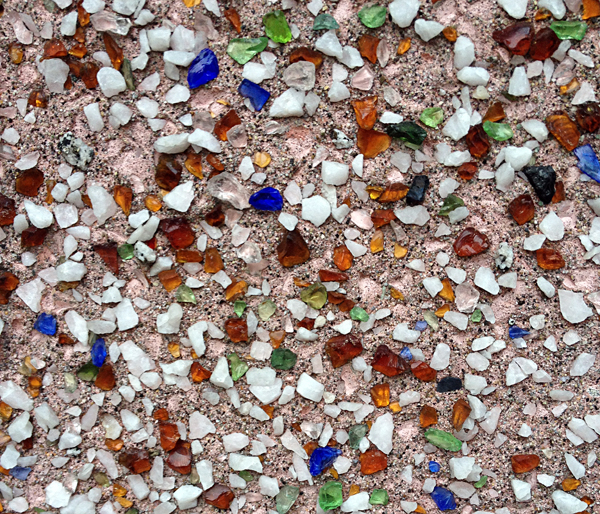 An apparent local variant to rock-dash, bottle-dash was used to add some colour and sparkle to the stucco finish. Crushed glass (brown beer bottles, green pop bottles, clear milk bottles and blue milk of magnesia bottles) was added to a white quartz aggregate...

A house updated with a bottle-dash (or other dash) stucco exterior requires little, if any maintenance... Unlike regular rock-dash stucco which was quite common in North America, bottle-dash stucco seems to be a purely Pacific Northwest [Canada] phenomenon... Predominated by bits of brown and green glass, my aunt’s house also had bits of blue glass dotting its stuccoed surface. My mother once told me that when she was young, she recalls rare instances when bits of red glass were found.