The craters of Siberia - updated x2 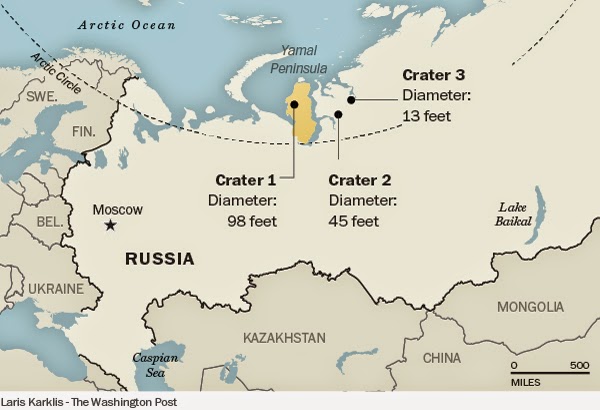 In July 2014, news reports appeared of a giant crater appearing in the Siberian tundra.  Salon offered a summary of possible etiologies:


A 250-foot crater of unknown depth mysteriously appeared in Siberia’s Yamal peninsula, the Siberian Times reports, and scientists today are headed over to investigate. Researchers have already ruled out a meteorite as a potential cause. Same goes, presumably, for UFOs, as some suggested. A more likely explanation, according to Anna Kurchatova, with the Sub-Arctic Scientific Research Centre, could have to do with the thawing of Siberia’s permafrost, a consequence of global warming. The rapid release of gas previously trapped in the ice, she said, could have combined with sand beneath the surface to form an underground explosion...

University of New South Wales polar scientist Chris Fogwill agrees that global warming is the likely cause. In his opinion, provided by the Sydney Morning Herald, he explained that what we’re looking at might be a collapsed “pingo,” a natural geological phenomenon associated with the melting permafrost.

As additional craters developed (or were discovered), the Washington post provided a map of their locations [top].  Since both of those articles cited The Siberian Times, I headed there for followup reports.

The first comprehensive report from The Siberian Times included several dozen ground-level and aerial photos and a video (link now dead), which, if not explanatory at least offered a perspective on the size of this crater.

In November, Russian scientists rappelled down into the crater.


Leader of the new mission, Vladimir Pushkarev, director of the Russian Centre of Arctic Exploration, told The Siberian Times: 'We managed to go down into the funnel, all was successful. We used climbing equipment, and it is easier to do this in winter, than in summer, with the ground now hard.

'We took all the probes we planned, and made measurements. Now scientists need time to process all the data and only then can they draw conclusions.'

The funnel of the crater is about 16.5 metres deep, not including an earthen rampart on the surface, formed in the blowout, of several metres in height.

Photos and a video at the link.


The main element - and this is our working theory to explain the Yamal crater - was a release of gas hydrates. It turned out that there are gas hydrates both in the deep layer which on peninsula is several hundred metres down, and on the layer close to the surface', said scientist Vladimir Potapov before the latest expedition. 'There might be another factor, or factors, that could have provoked the air clap. Each of the factors added up and gas exploded, leading to appearance of the crater.'

He stressed: 'The crater is located on the intersection of two tectonic faults. Yamal peninsula is seismically quiet, yet the area of the crater we looked into has quite an active tectonic life. That means that the temperature there was higher than usual.'

They drew comparisons to the Bermuda Triangle:


The name Yamal means 'the end of the world', which ironically is also a description applied to the Bermuda Triangle for those lost on boats and planes. The areas stretches from the British Overseas Territory in the North Atlantic Ocean to the Florida coast, to Puerto Rico.

Professor Yeltsov said: 'There is a version that the Bermuda Triangle is a consequence of gas hydrates reactions. They start to actively decompose with methane ice turning into gas. It happens in an avalanche-like way, like a nuclear reaction, producing huge amounts of gas. That makes ocean to heat up and ships sink in its waters mixed with a huge proportion of gas.

And these notes from a December article:


About a third of the crater is filled with water because of its melting walls and rain, and it is thought that within three years it will be almost full. Initially it was thought that by 2024 it will be difficult to see the 40 metres wide and 50 metres deep crater at all as it will be completely submerged by a lake.

But Dr Leibman told the Siberian Times that the crater may already be under water from the melting ice by next year. She said: 'Judging by the pace, by the end of next summer it may turn into a lake.

'I once heard a theory that deep Yamal lakes were mostly the result of emissions of gas. Then I just laughed at it. Now I take back my laughter: I think that a lot of deep lakes on Yamal were formed in this way.'

There is still disagreement among the Russian scientists as to whether the heat necessary to intiate this process came from above, via global warming, or from below because of tectonic activity.

Dozens of new craters have been reported.  These may be previously-existing craters that have been discovered, rather than newly-created ones.  Story also covered by the Washington Post.

Reposted from 2015 to add this impressive BBC video and to delete an old dead video (some of the old links may also be dead).

The lady from the Max Planck Institute is well-spoken and explains the situation concisely.  What impressed me from the video was the immense size of this collapse.  I had seen aerial photos before, but had not appreciated the extent of the slumping because there's no banana for scale.  This video is worth a couple minutes viewing time.