Warning to pharaohs: Frogs come next 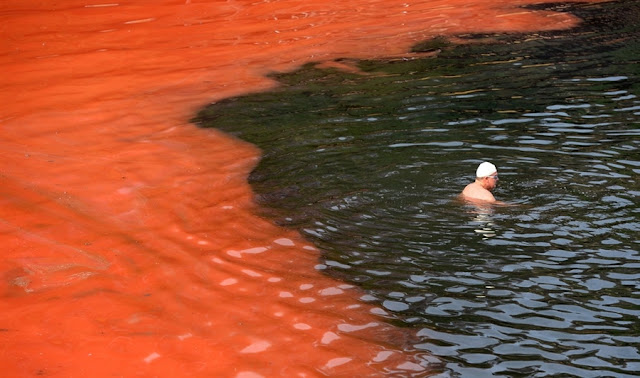 While the red algae, known as Noctiluca scintillans or sea sparkle, has no toxic effects, people are still advised to avoid swimming in areas with discolored water because the algae, which can be high in ammonia, can cause skin irritation.

This photo from a recent outbreak at beaches near Sydney.  "Sea sparkle" is such a great name I had to look it up.  Apparently some populations of this organism are bioluminescent (note the name nocti-luca):


The bioluminescent characteristic of N. scintillans is produced by a luciferin-luciferase system located in thousands of spherically shaped organelles, or “microsources”, located throughout the cytoplasm of this single-celled protist.

And, as it turns out, I blogged some great photos of that phenomenon, also occurring in Australia (Victoria).