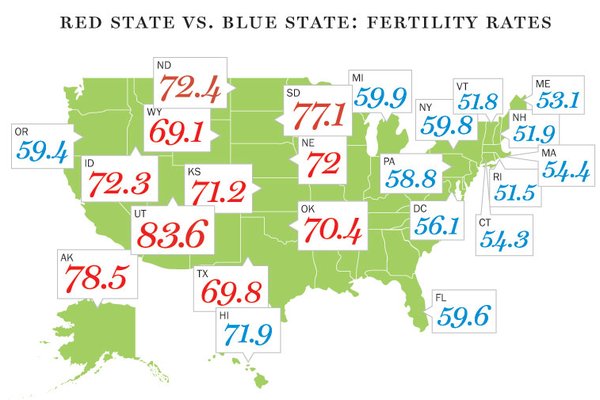 Almost invisibly over the past decade, family size in America has emerged as our deepest political dividing line.  Stunningly, the postponement of marriage and parenting — the factors that shrink the birth rate — is the very best predictor of a person’s politics in the United States, over even income and education levels, a Belgian demographer named Ron Lesthaeghe has discovered. Larger family size in America correlates to early marriage and childbirth, lower women’s employment, and opposition to gay rights — all social factors that lead voters to see red...

Yet, for all those social measures on the 2012 ballot, our near-continental divide of politics and fertility was even more distinct during the Bush era... Celinda Lake, one of the Democratic party’s leading pollsters and strategists, who predicted the single ladies swing well before the exit polls, told me our future partisan fertility map is being redrawn. She says that as birth rates rise amongst women of color who vote consistently Democrat, the states working blue may make a radical turn to become our most fertile ones. “We’re on the verge of a dramatic shift. It will be a different conversation ten years from now,” Lake told me, estimating that the predictive power of fertility will last until 2020, but not much longer.

The map does not show data for all the states.  What it demonstrates is that the states with fertility rates 70 and above tended to be "red" states (Hawaii the exception), while those with rates below 60 were all "blue" states in this most recent election.

Text from NYMag, via The Dish.   Fertility data: CDC, "Births: Preliminary Data for 2011."