Pianos in the dumpster 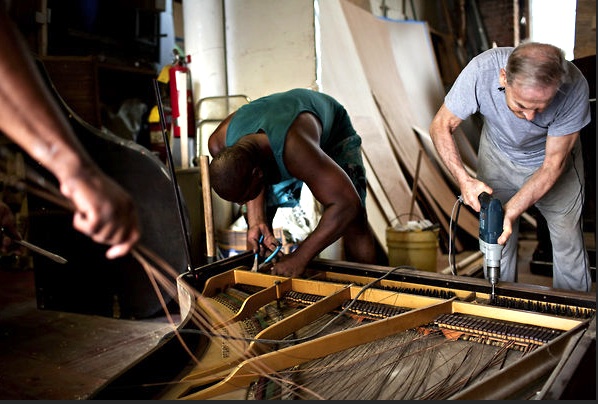 I've encountered two articles in recent months about the sad fate awaiting many current pianos.  First from the New York Times in July:


The value of used pianos, especially uprights, has plummeted in recent years. So instead of selling them to a neighbor, donating them to a church or just passing them along to a relative, owners are far more likely to discard them, technicians, movers and dealers say. Piano movers are making regular runs to the dump, becoming adept at dismantling instruments, selling parts to artists, even burning them for firewood...

With thousands of moving parts, pianos are expensive to repair, requiring long hours of labor by skilled technicians whose numbers are diminishing. Excellent digital pianos and portable keyboards can cost as little as several hundred dollars. Low-end imported pianos have improved remarkably in quality and can be had for under $3,000...


The average life span rarely exceeds 80 years, piano technicians say. That’s a lot of pianos now reaching the end of the line. Piano dealers also blame other changes in society for a lack of demand in the used-piano market: cuts in music education in schools, competition for practice time from other pursuits, a drop in spending on home furnishings with the fall of the housing market...

When owners ask where a cherished piano is going, he said, he tries to avoid the subject or tells them it will be put up for adoption. “The last thing they want to hear is that it’s going to a landfill,” he said.

Similar sentiments are echoed across the pond in a BBC report:

A piano has thousands of moving parts, making restoration a very time-consuming, and specialist business. Just polishing a piano can take 70 hours. "It becomes a money pit," says Gist, and so often the best advice - and advice he doles out several times a day - is just to get rid of it...

"In the 1920s, they were made for the mass market. They were not made to last, they were made to sell," says Marcus Roberts of Roberts Pianos in Oxford. He says, much like a house, a piano needs to be built with good foundations if it is to last. "When you are making cheap pianos to sell, you are going to cut corners. Those pianos were never put together properly."..

But there is one market where the piano is booming - China.  Around 300,000 pianos were made in big factories in China last year, as well as a large share of the world's piano parts for repairs...


Because of the tension in the strings, it is dangerous to dismantle a piano if you don't know what you are doing - and a slow task if you do.  Loosening the strings, and separating the wood from the metal takes around 10 hours, says Hirschfelder. If a piano has really been neglected it might have attracted rats or mice, who like to eat the animal glue used to hold it together and nuzzle up to the felt, meaning that hantavirus - a deadly disease spread by rodents - is a danger.

The keys are made of ebony and ivory, which he has seen made into jewellery, artwork - even exclusive tiling around swimming pools.