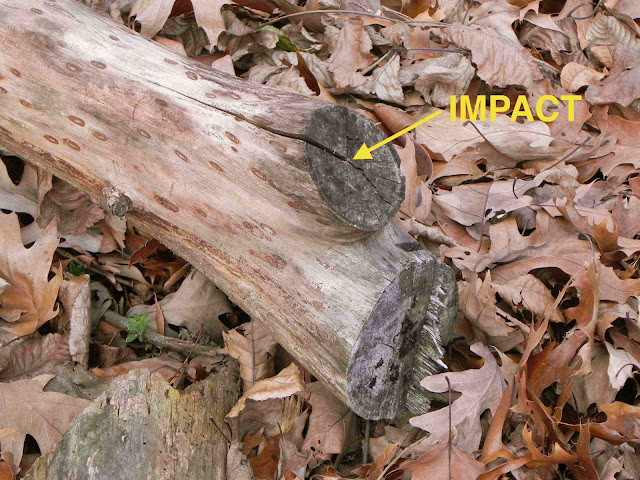 "In the midst of life we are in death." This antiphon is attributed to the Benedictine monk Notker I of Saint Gall, who died in 912. Legend has it that the musician and poet wrote it when he saw construction workers building a bridge hover over an abyss. Most likely, however, the hymn is much older and originated in France around 750.

Probably everyone can tell one or more stories entitled "How I Almost Died."  Here is my latest one.

We were in the process of transferring an immense pile of mulch from the driveway to some trails in the woods.  My wife had pitchforked about 3 tons of it over an embankment to a lower level where I was moving it to tarps to drag to the woods.

I've walked those woods hundreds of times, for chores and for contemplation.  On a sloping hill towards the back I've passed this set of old cut logs - 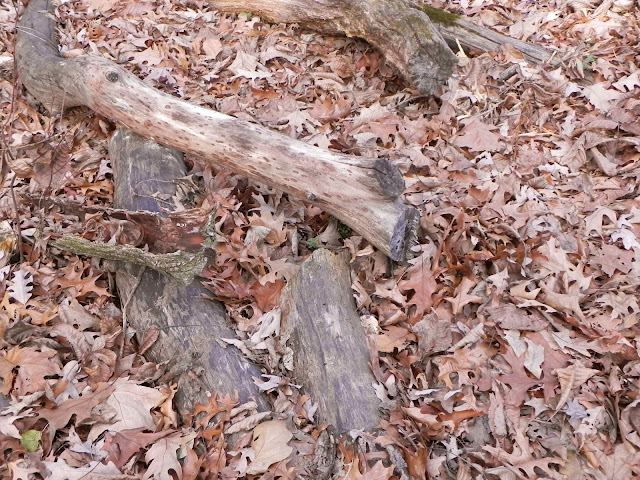 - which have been there for years without rotting, so are certainly hardwood and probably oak.  On this almost-fateful day I had dragged the tarp of mulch to this trail segment and was turning around to rake it level when I started to fall.

When I was a little kid I contracted polio, which left me with one weakened leg, so over the years I've become quite experienced at falling down.  As a person walks or turns there are different muscles and different fascicles of each muscle that have to activate in turn to generate motion or provide stability; when the sequence doesn't activate smoothly, down you go.  I've become quite adept at falling - not quite "balletic" in gracefulness, but certainly able to catch myself and suffer no consequences except torn knees of trousers.  But this time I fell backwards...

When you fall backwards, it's very hard to modify the fall.  On this occasion I could do nothing, and factoring in the slope of the hill my head experienced a free-fall of about six feet before encountering the log.  It was basically equivalent to getting slammed in the head with a baseball bat.

Going down backward, I had no idea what I had hit.  It was a powerful blow, and since we have quite a few large boulders embedded in the ground, I assumed that was what my head had hit.   I remember the pain and the flashes of light, and my first response was to reach my hand back there to palpate the site, expecting to find a depressed skull fracture.  There was none (and not even any blood).

I did follow Dylan Thomas' famous advice not to go quietly into that good night.  I let out a series of screams - which no one heard.  My wife was in the house and no neighbors within earshot.  I got to my feet and with some dizziness, falling once more, managed to get myself back to the house.  Over the ensuing hours, wondering if I had a subdural hemorrhage, I waited to see what neurologic defects might develop, checking my pupils and cerebellar function.  Nothing happened, and I seem to be o.k.

When I went back to the woods later, it struck me how incredibly lucky I had been.  My  head had hit a smoothly-sawed-off stub, probably squarely in the center; had it struck to the side, the cut edges would have lacerated the scalp and perhaps fractured the cranium. 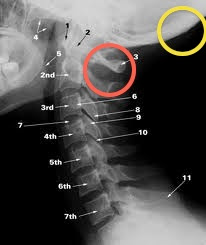 And the point of impact on the skull was almost exactly on the point of the occiput, which is a relatively robust, dense bony area of the cranium.

The xray at right shows a lateral view of the neck.  I've added a yellow oval at the region of the occiput.  Just an inch or two lower is the cervical spine (red oval).  I have no doubt that if that log had impacted my c-spine with the same force that the skull sustained, that I would have incurred a spinal fracture.  The results would have depended on the location of the break.

If the spine had been transected low, I could have been rendered paraplegic, with loss of function of the legs.  A little higher might have made me quadriplegic, with all four limbs paralyzed.  And at the top, damage to the phrenic nerve would have paralyzed the diaphragm, making it almost impossible to breath (especially in the supine position).  I would have been unable to call for help, and before anyone would have found me, I would have been dead.

But I'm still here, and with a week having passed, apparently healthy without any complications.  It's little "memento mori" like these that remind us how precious - and how tenuous - our lives are.