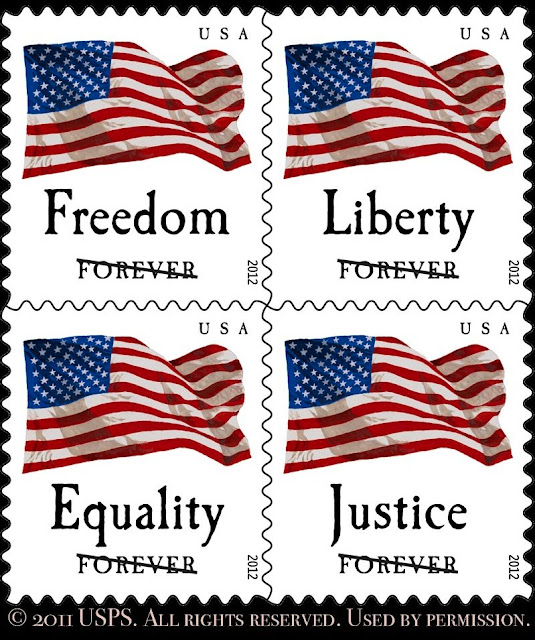 Law (or convention?) in the United States mandates that when images of postage stamps are printed, a line is drawn through the denomination (I believe it's also required that the images be produced at a size larger or smaller than the actual stamp).  These alterations were originally created to prevent people from cutting out stamp images and using them for postage.  They would seem to be hopelessly outdated now that stamps are phosphor coated, and the modifications to the images are virtually useless in the face of modern image-editing software.  Still, it continues to be done, as in this image from the Virtual Stamp Club.

For this new (September) issue of the "Four Flags" stamps, the result is a bit bizarre.  "Forever stamps" are a form on non-denominated postage first introduced in 2006.

In the image of these stamps (though not on the stamps themselves), the obliteration of the "denomination" becomes an obliteration of the word "forever" which in juxtaposition with the words "freedom, liberty, equality, justice" delivers a rather odd (if unintentional) message on this election day.