The utility of wormholes in woodblock prints

The relevant biology of wood-boring beetles is schematized at the left, and the resultant effect on woodblock prints is depicted on the right.  Now a biologist reports that analysis of the holes can provide useful infomation about the dating and origin of prints:


“Because most prints, including those in books, have publication dates, we know that the wormholes in question were made very close to that date,” Hedges said. “It’s an almost perfect biological timestamp. And in most cases, we also know where the book was printed. So wormholes can tell us when and where a species existed with fairly good accuracy, more than 500 years ago, and that is amazing.”.. 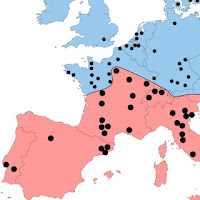 Hedges studied 3,263 wormholes visible in 473 different prints made between 1462 and 1899. He found that there were two distinct sizes of holes: some were 2.3 millimeters across and others were closer to 1.4 millimeters wide. And there was a distinct pattern of these hole sizes across the European continent; all of the smaller holes were found on prints made in the northeast, and the larger holes came from the southwest...

The wormhole technique might also help solve some questions in art history as well. “There are some situations in which a book or print’s origin is unknown,” Hedges said. “Now that we know that different species of beetles existed in different locations in Europe, art historians can determine whether a book was from northern or southern Europe simply by measuring the wormholes.”