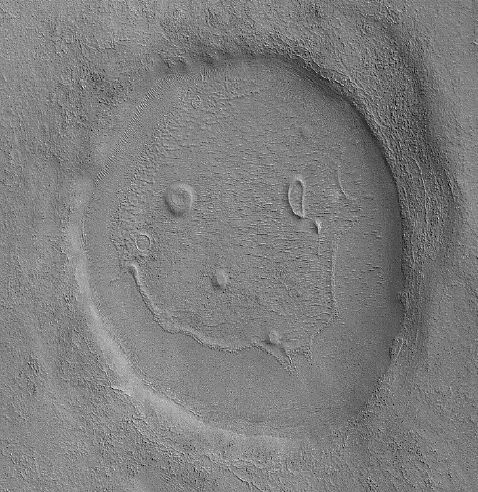 As NPR reports, NASA has "exciting" news that it is withholding pending confirmation:


They have some exciting new results from one of the rover's instruments. On the one hand, they'd like to tell everybody what they found, but on the other, they have to wait because they want to make sure their results are not just some fluke or error in their instrument...

SAM is a kind of miniature chemistry lab. Put a sample of Martian soil or rock or even air inside SAM, and it will tell you what the sample is made of.

Grotzinger says they recently put a soil sample in SAM, and the analysis shows something earthshaking...

Grotzinger says it will take several weeks before he and his team are ready to talk about their latest finding.

Personally, I'm hoping they will announce they've discovered who is drawing the happy faces on Mars.


This picture of a crater resembling a "happy face" was acquired by the Context Camera (CTX) on Mars Reconnaissance Orbiter on January 28, 2008. The unnamed crater is about 3 kilometers (1.9 miles) across. It is located among the Nereidum Montes, north of the Argyre basin, near 45.1°S, 55.0°W. North is toward the right and sunlight illuminates the scene from the upper right.

Another happy face was observed on Mars as early as 1976.

Image (credit NASA/JPL/MSSS) cropped slightly from the original at The Planetary Society.

And with that happy face, my holiday blogcation starts.  Happy Thanksgiving to all.