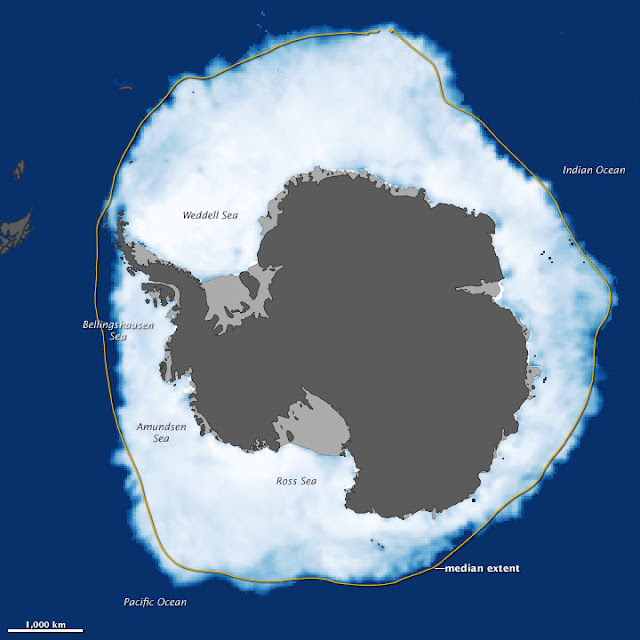 The information and the image come from NASA's Earth Observatory, which also offers this scatter plot depicts the relevant data from the past 30 years:

It's likely that this information will be used, rightly and wrongly, in the debate about climate change.  Here's an excerpt of the discussion at the NASA link:


Two weeks after a new record was set in the Arctic Ocean for the least amount of sea ice coverage in the satellite record, the ice surrounding Antarctica reached its annual winter maximum—and set a record for a new high... The yellow outline shows the median sea ice extent in September from 1979 to 2000. Sea ice extent is defined as the total area in which the ice concentration is at least 15 percent.

The graph of NSIDC data shows the maximum extent for each September since 1979 in millions of square kilometers. There is a lot of variability from year to year, though the overall trend shows growth of about 0.9 percent per decade...

“The year 2012 continues a long-term contrast between the two hemispheres, with decreasing sea ice coverage in the Arctic and increasing sea ice coverage in the Antarctic,” Parkinson added. “Both hemispheres have considerable inter-annual variability, so that in either hemisphere, next year could have either more or less sea ice than this year. Still, the long-term trends are clear, but not equal: the magnitude of the ice losses in the Arctic considerably exceed the magnitude of the ice gains in the Antarctic.”