Soaker hose after a drought 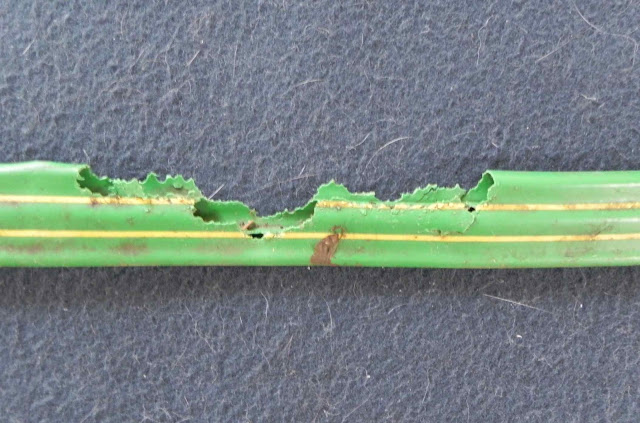 The woods behind our home is classified as "xeric" (relatively dry, typically hosting drought-tolerant species like white, red, and black oak), but we wanted to have some underplantings of hosta, so for years I had left in the woods a "soaker hose" to use when the hosta needed watering.

This year Madison had a record drought; we even stopped watering, to let the grass and various plants go dormant.  As I worked in the woods this week putting mulch on the walking paths, I had to lift the old soaker hose, and discovered the above segment.

Some critter was able to smell residual water inside the hose and went after it.  Judging from the size of the bite marks I would guess it to have been a very small rodent, which would make sense since the larger mammals (chipmunks, raccoons, squirrels, opossum, fox) are able to travel longer distances to find water.  We typically keep a couple "water features" (basins) in the woods to service the small ones, but I guess those had run dry.