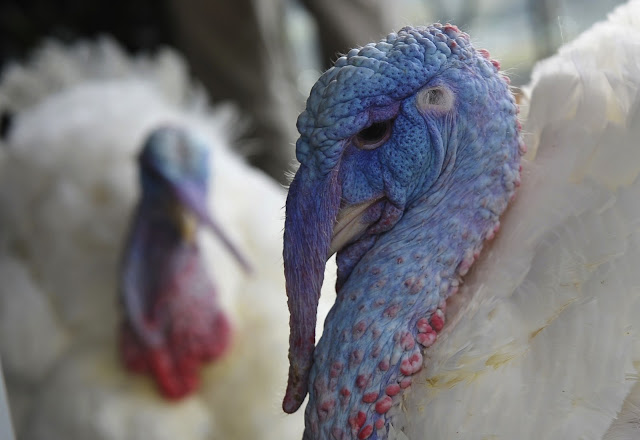 My initial intent was to mock the silly ritual in which the President of the United States "pardons" a turkey.  A column at Washingtonian describes the process:


Presidents have pardoned turkeys from Thanksgiving slaughter each year since George H.W. Bush officially freed one in 1989... The modern-day incarnation is overseen by the National Turkey Federation and the White House...

National Turkey Federation chairman Steve Willardsen chose a farm he owns in Rockingham County, Virginia, as the birthplace. Forty eggs were selected and incubated together... Handlers familiarized the turkeys with human contact and played music around the clock so the turkeys got used to loud noises and human voices... This year, children in the Shenandoah Valley will submit potential names for the birds, and the White House will choose two and announce them at the ceremony...

On the Tuesday before Thanksgiving, the turkeys will be driven three hours to the W Hotel in downtown DC. They’ll stay in a suite with sawdust and wood chips on the floor and will snack on corn and cranberries from a special avian “munchie box.”.. The day before Thanksgiving, Willardsen will take the turkeys across the street to the White House for a small gathering with the Obama family. The ceremony usually lasts half an hour.

The turkeys will be driven to George Washington’s Mount Vernon estate, where Colonial reenactors will transport them in a horse-drawn carriage to a stage for another ceremony. The turkeys will be on display through January 6 and then will retire in their own little house on the estate.

I suppose I'm a humorless curmudgeon, but in my view this entire process is nothing but a publicity campaign for the National Turkey Federation (which can't possibly need much publicity at Thanksgiving) and a pointless waste of time for POTUS (and some taxpayer money).

And what's the point of "pardoning" one turkey while countless millions others are slaughtered?  An article at the Washington Post agrees with me that this ritual has gone past its sell-by date, but the commenters call the author pretentious, "full of hate," "too big for his britches," and a "fun sucker" who "takes the joy out of everything."

So, rather than rant about the pointless of the spectacle, I'll focus instead on what I think is the more interesting question - why is the turkey's face blue?  I found an answer at Wisconsin Hunter:


Males appear darker than females because their body feathers are black tipped, while the body feathers on the hens are white or buff tipped. Hens and gobblers also differ in the number and size of head adornments. On the male, a fleshy growth, called the "wattles", hangs from underneath the chin, and growths called "caruncles" are located on the side and back of the neck. The "snood" or "dew bill" is a fleshy projection growing above and resting on the nose. Basically bare, the male turkey's head may be colored red, white or blue depending on pigments and circulating blood. During the mating season, while the gobbler is strutting, its head turns bright red, and if he's frightened the head turns pale blue. In hens, the head is usually a pale blue and has more feathers. The most talked about difference between male and female turkeys is the presence of the beard – a bristly mass of modified feathers found on the breast of the mature male. Immature males (jakes) do not normally have an obvious beard until around 2 years of age. Beards are sometimes found on females, however, and multiple beards are occasionally found on both sexes.

I see turkeys frequently during walks at the University of Wisconsin arboretum, and had one almost frightening confrontation with an angry male on a narrow trail during mating season.  They are formidable birds.