Here's how much we spend at gas stations 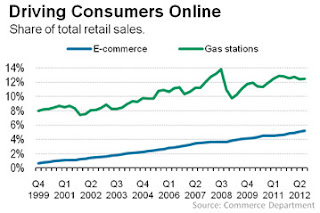 13 cents of every dollar expended on retail sales is spent at gasoline stations.  Certainly not all of it pays for gas, since junk food etc may be included, but the figure is still amazing.

The article at the Wall Street Journal notes that this proportion has leveled off in recent years, and notes that the rise of e-commerce may be one of the reasons.


In the third quarter, e-commerce sales continued to surge, according to the Commerce Department. More than five cents of every dollar spent at retailers in the July-to-September period was spent online. That share has basically quintupled in the past decade, and while growth slowed slightly during the recession, it has continued to steadily march upward. The more goods people can get online, the less time they need to spend in the car traveling to brick-and-mortar retailers.