Catalans will vote on secession 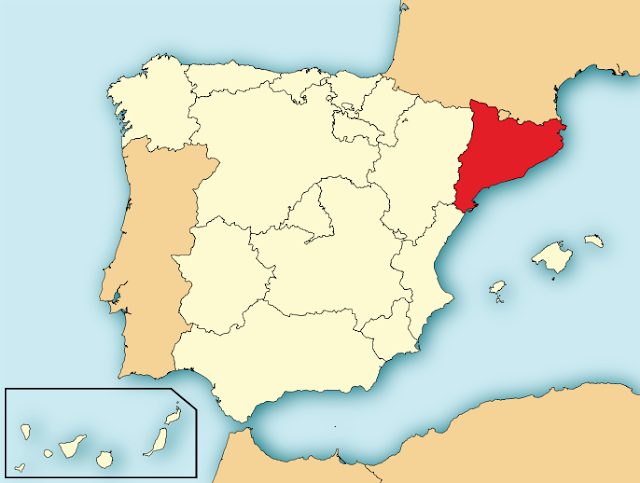 For the past several weeks, residents in several U.S. states have threatened secession, a prospect that is totally unlikely, but in Spain there is real concern about the possibility of Catalonia breaking away from the rest of Spain.  These excerpts from The Guardian:


The Catalan separatist campaign will come to a head this weekend in an election that will in effect serve as a plebiscite on the region's future in Spain.

It is a long-running affair, borne of historical and cultural factors that have persisted for centuries. But you do not have to scratch too hard before you get to the principal bone of contention in crisis-ridden Spain: money.

Spain is suffering its most agonising economic decline in decades. Catalonia has not been spared. But it still claims it subsidises the rest of Spain to the tune of €16bn a year. This money, equivalent to 8% of regional GDP, would dig Catalonia out of a debt and deficit hole and provide greater investment and a better welfare state, many believe...

Millions of Spaniards view the increasingly strident calls for self-determination in Catalonia with alarm. This is a country with form. When the region last declared its own state in 1934, Madrid answered by declaring a state of war. Separation would provide an ominous precedent in a nation where the increasingly weak centre has spent decades handing new powers to its headstrong regions...

The problem is not just Catalonia. Elections were held in October in the northern Basque country, where the blood spilt by Eta over four decades kept separatism in the headlines but stopped many peaceful Basques supporting it. The vote produced a landslide victory for nationalist and separatist parties, who jointly took two-thirds of the seats...

"The problem for Spain, which is what limits the ability of the prime minister to be flexible, is the dynamics of the breakdown. Once Catalonia is out, the burden on the other rich regions increases, and they will want out," says Luis Garicano of the London School of Economics. "So for Spain the prospect, without Catalonia, is complete disintegration of the country."

More at the link.  Posted because a close family member has become a de facto Catalan.