"... thirty nine ninetieths of a Dollar" 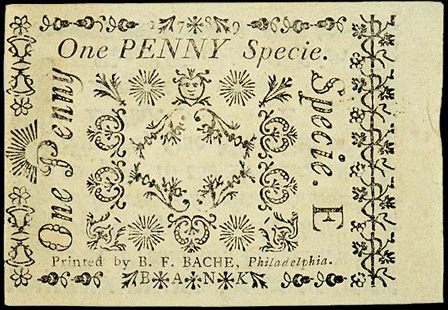 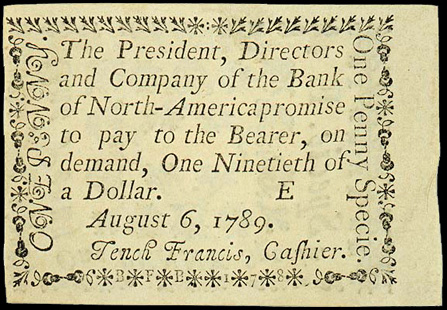 The full phrase, as I encountered it* read as follows:


He sent in his expense account: "for himself & Servant, totaling one hundred and ten dollars and thirty nine ninetieths of a Dollar."

The expense account was by a Lieutenant Armstrong, who led an exploration westward to the Mississippi in 1790.

But why "ninetieths" of a dollar?  I thought I knew early American coinage reasonably well, but I had never encountered this type of accounting.  I reached for an old copy of Yeoman's Red Book to review the early pennies and large cents and could find nothing relevant, nor was there anything in the continental currency section about cents or pence being 90 to the dollar.

So, back to the web, which promptly yielded the images above, which are of course not coins, but rather -


...small change bills of credit payable in specie issued by the Bank of North America in Philadelphia. This was one of several fractional currencies printed to carry on commerce during the "Copper panic" when the price of copper dropped dramatically and copper half penny coins were either not accepted by merchants or only accepted at far below their denominated value. The notes were printed by Benjamin Bache in Philadelphia on paper supplied by Benjamin Franklin that had a marbled border along the top of the sheet.

But why a 90:1 ratio rather than 100 pennies to the dollar?  I found part of the answer at the West Jersey History Project:


Mr. Adams, in his report on the subject of weights and measures, made in 1820, remarks: "It is now nearly thirty years since our new moneys of account, our coins and our mint, have been established. The dollar, under its new stamp, has preserved it name and circulation. The cent has become tolerably familiarized to the tongue, wherever it has been made, by circulation, familiar to the hand. But ask a tradesman or shopkeeper in any of our cities what is a dime, or a mill, and the chances are four in five that he will not understand your question. But go to New York and offer in payment the Spanish coin, the unit of the Spanish piece of eight, and the shop or market man will take it for a shilling. Carry it to Boston or Richmond, and you shall be told that it is not a shilling but a ninepence. Bring it to Philadelphia, Baltimore, or the city of Washington, and you shall find it recognized for an eleven penny bit, and if you ask how that can be, you shall learn that the dollar being of ninety pence, the eighth part of it is nearer to eleven than any other number; and pursuing still further the arithmetic of popular denominations, you will find that half of eleven is five, or at least, that half of the eleven penny bit is the fipenny bit, which fipenny bit at Richmond, shrinks to four pence half penny, and at New York swells to six pence."

Here is the topic mentioned in The Bankers Magazine, via Google Books during a discussion of the history of the word "dollar":

So, at the time Lieutenant Armstrong submitted his expense account to the government, "the dollar in Pennsylvania equalled seven shillings and sixpence, and the penny was the one-ninetieth of a dollar."

For those who want to pursue this more fully, I think the best discussion I found this morning is in this pdf file entitled State "Currencies" and the Transition to the U.S. Dollar", but it's over 50 pages long and football games are starting shortly, so all I can offer is this screencap:

What a mess it must have been for the early colonists and Americans to cope with currencies and money.

* in Undaunted Courage; Meriwether Lewis, Thomas Jefferson, and the Opening of the American West, by Stephen Ambrose (an excellent book, btw, of which I've only read a couple chapters and on which I'll have more to say later.)