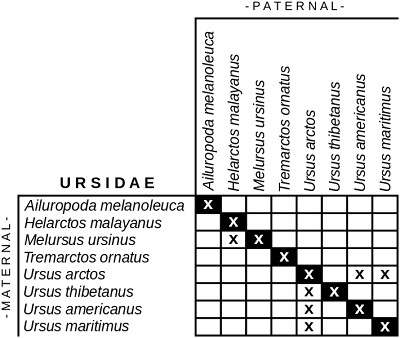 Hybrid bears are described in Wikipedia:


A grizzly–polar bear hybrid (also pizzly bear, prizzly bear, or grolar bear) is a rare ursid hybrid that has occurred both in captivity and in the wild.

On 8 April 2010, David Kuptana, an Inuvialuit hunter from the nearby community of Ulukhaktok on Victoria Island shot what he thought was a polar bear. After inspecting the bear and having its DNA tested, it was discovered that the bear's mother was a grizzly-polar hybrid and the father was a grizzly bear. The Department of Environment and Natural Resources for the NWT said that it "...may be the first recorded second-generation polar-grizzly bear hybrid found in the wild". The bear possesses physical characteristics intermediate between grizzlies and polar bears, such as brown fur on its paws, long claws and a grizzly-like head...

Since the 2006 discovery placed the hybrid into the spotlight, the media have referred to this animal with several portmanteau names, such as pizzly, grolar bear, and polizzly, but there is no consensus on the use of any one of these terms. Canadian wildlife officials have suggested calling the hybrid "nanulak", taken from the Inuit names for polar bear (nanuk) and grizzly bear (aklak). By one convention, the name of the sire comes first in such combinations: the offspring of a male polar bear and a female grizzly would be the suggested nanulak or a "pizzly bear", while the offspring of a male grizzly and a female polar bear would be a "grolar bear" or possibly an aknuk.