But this "Sam" is a nine-year-old girl.


Nicknamed 'Sweet-Feet', the speedy nine-year-old Sam Gordon weighs just 28kg but has the pace to beat defensive players twice her size. Sam learned to play with her big brother and is now the standout player in her all-boys football league in Utah. Her record for 2012 stands at 35 touchdowns, 232 carries and 1,911 yards.

Via The Guardian.  (The video gives new meaning to the phrase "runs like a girl.")

Update:  Sam is now featured on a Wheaties box: 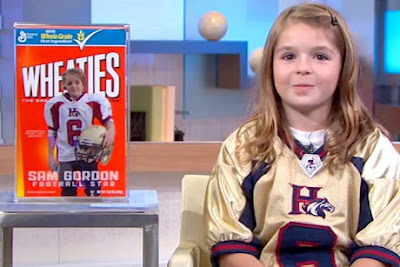 She’s been on ESPN’s “Sports Center,” “Monday Night Countdown” and ABC’s “Good Morning America.” But her best media appearance was on NFL’s “GameDay.” Instead of entertaining the curiosity of television hosts, she hung out with pro football players. Like a lot of athletes, she is much more relaxed in the company of her tribe.

More at a Salon column.