The "She-Pee" is a public urinals for women designed for use where large crowds make speed and efficacy more important than privacy. 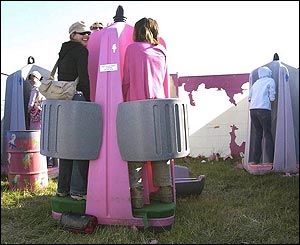 Female revellers at Britain’s outdoor Glastonbury Festival will be able to enjoy this year’s show without straining their bladders — courtesy of stand-up urinals.

Organisers have installed two sets of the urinals around the main Pyramid stage for the exclusive use of women, complete with “concierge” attendants to ensure a dignified experience.

Key to the arrangement is a special, anatomically shaped funnel to be handed out to each user. 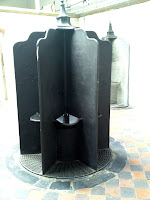 Photo from the BBC in 2004.  Text (and more details) at xes, via Grit in the Gears, where the similarity is noted to Victorian-era public urinals on display at the railway museum in Darlington:

There is of course more information on urinals at the relevant Wikipedia entry, including this tidbit:


Ernest Hemingway converted a urinal from Sloppy Joe's bar into a water fountain for his cats. The fountain remains a prominent feature at his former home in Key West, Florida, a popular tourist destination in the town.