This graph does NOT mean Iran is working on a bomb 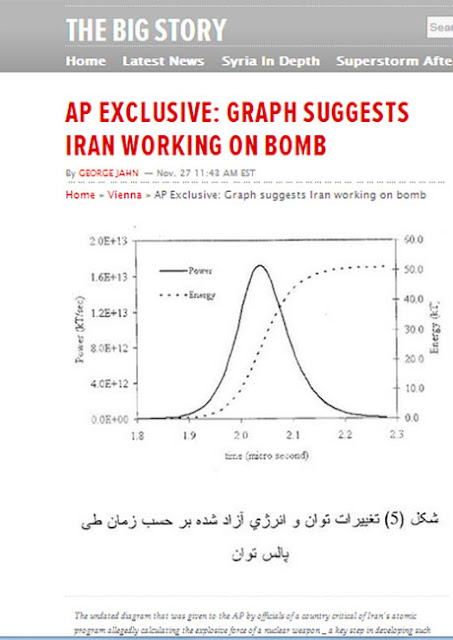 It's part of a hoax that has been disseminated by the Associated Press:


VIENNA (AP) — Iranian scientists have run computer simulations for a nuclear weapon that would produce more than triple the explosive force of the World War II bomb that destroyed Hiroshima, according to a diagram obtained by The Associated Press.

The diagram was leaked by officials from a country critical of Iran's atomic program to bolster their arguments that Iran's nuclear program must be halted before it produces a weapon. The officials provided the diagram only on condition that they and their country not be named.


...this graph - which is only slightly less hilariously primitive than the one Benjamin Netanyahu infamously touted with a straight face at the UN - has Farsi written under it to imbue it with that menacing Iranian-ish feel, but also helpfully uses English to ensure that US audiences can easily drink up its scariness. As The Atlantic's Robert Wright noted: "How considerate of the Iranians to label their secret nefarious nuke graph in English!".

...even if one assumes that this graph is something other than a fraud, the very idea that computer simulations constitute "evidence" that Iran is working toward a nuclear weapon is self-evidently inane...

And the debunking continues in a followup article today:


At the Bulletin of Atomic Scientists (BAS), Yousaf Butt and Ferenc Dalnoki-Veress on Wednesday night wrote: "Graphs such as the one published by the Associated Press can be found in nuclear science textbooks and on the Internet.".. So what AP presented to the world as some sort of highly complex, specialized document was, in fact, nothing more than a completely common graph easily found in all sorts of public venues...

Even worse, the calculations reflected on this graph are patently ridiculous... That's because, they explain, "the diagram features quite a massive error, which is unlikely to have been made by research scientists working at a national level"; namely:


"The image released to the Associated Press shows two curves: one that plots the energy versus time, and another that plots the power output versus time, presumably from a fission device. But these two curves do not correspond: If the energy curve is correct, then the peak power should be much lower - around 300 million ( 3x108) kt per second, instead of the currently stated 17 trillion (1.7 x1013) kt per second. As is, the diagram features a nearly million-fold error."

There are people who desperately want to trigger a war with Iran.