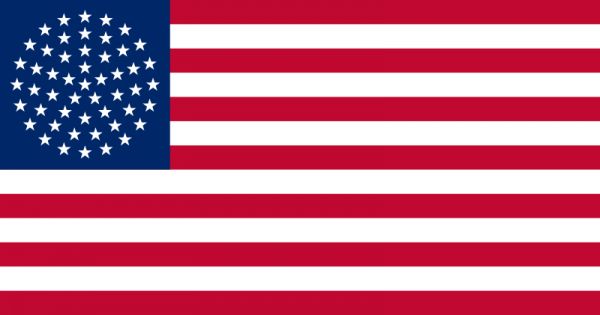 Puerto Ricans faced a fundamental question on Election Day: Should they change their ties with the United States?..

The two-part referendum first asked voters if they wanted to change Puerto Rico's 114-year relationship with the United States. A second question gave voters three alternatives if they wanted a change: become a U.S. state, gain independence, or have a "sovereign free association," a designation that would give more autonomy for the territory of 4 million people.

With 243 of 1,643 precincts reporting late Tuesday, 75,188 voters, or 53 percent, said they did not want to continue under the current political status. Forty-seven percent, or 67,304 voters, supported the status quo.

On the second question, 65 percent favored statehood, followed by 31 percent for sovereign free association and 4 percent for independence...

From Nevada Appeal, via Reddit.  Image of a possible 51-star flag via Neatorama.  A Washington Post article discusses the reasons why Puerto Rico might want to join the United States:


For one thing, becoming a state would allow them to benefit from an extra $20 billion a year in federal funds –  something Puerto Rico could use, given its 13 percent unemployment rate...

Outside observers also say that statehood would bolster both Puerto Rico and the United States. Puerto Rican residents currently don’t pay federal income taxes, and companies doing business there don’t pay corporate taxes — two loopholes that would be closed if the island were made the 51st state...

Opponents of statehood in Puerto Rico have argued that becoming part of the United States might compromise the island’s language and culture, especially if the federal government requires it to adopt English as its sole official language (right now, it’s both Spanish and English), as a condition of its accession...

Both President Barack Obama and Mitt Romney have said they would respect Puerto Ricans’ statehood decision, whatever it may be.

Addendum: For additional insight into the intricacies of the vote results, see Jeffrey Cobia's analysis at his My random thoughts blog.