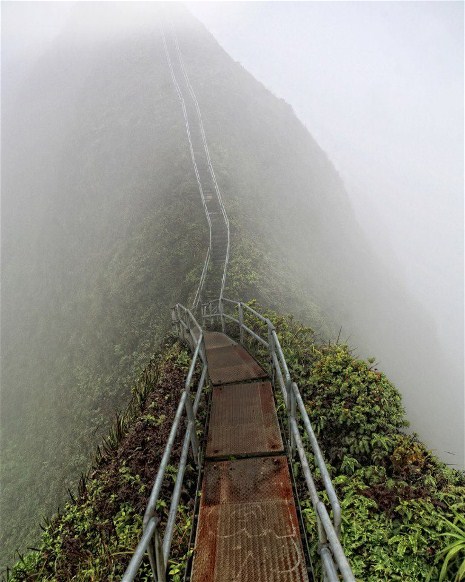 The Haiku Stairs, or the Stairway to Heaven, is a semi-secret forbidden hike on the island of Oahu, Hawaii. The stairs were originally built in 1943 to install antenna cables as part of a larger military radio communication system to communicate with US Navy submarines as far away as Tokyo Bay. The original wooden steps were replaced by metal, cable-supported stairs in the early 1950s when the US Coast Guard took over the installation.

According to Friends of Haiku Stairs, there are 3,922 steps.


The men who made the first ascent up Keahiakahoe in 1942 required 21 days to pioneer the route up the south wall of Haiku Valley. They considered it a "sissy's climb" when the way was made easier by laying wooden ladders along the trail, held in place by four-foot metal posts pounded into the lava cliffs. The ladders were later replaced by a wooden stairway. When the wooden stairs were done, the trip to the summit could be made in 3 1/2 hours. Ten years later, the wooden stairs were replaced by the galvanized steel stairway that was used until its closure in 1987. In spite of corrosion, shifting, and missing sections, a fit climber can now reach the top in two hours or less, passing remnants of the original wooden stairway cast off to the side.

The Haiku Stairs, however, are more than an artifact of World War II history. Climbers can experience a variety of micro-climates and ecological communities on the way up. Progressing from a disturbed area of mostly alien plants at the base, the Stairs ascend into a relatively undisturbed plant community, where more than 50 native plant species can be observed. On a clear day, the panorama of Windward Oahu opens to view, with glimpses to leeward through the mountain gaps. On a typical trade wind day, a full range of weather can set clouds swirling in motion, bringing sunshine and pouring rain, sometimes both at once.

Much more information in sublinks at the organization's website.

Photo credit, via The Soul is Bone.