Why the U.S. should raise taxes on gasoline 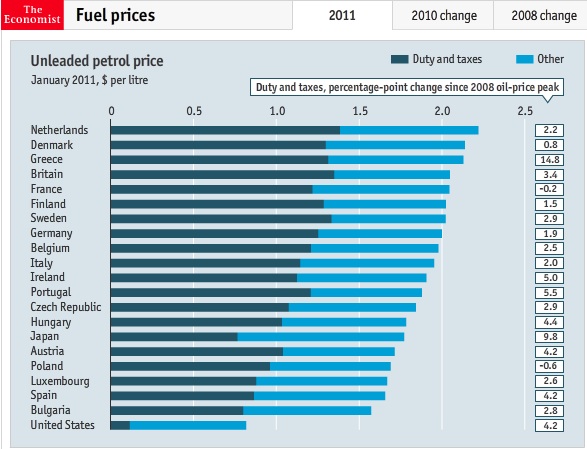 This very informative graph was posted at The Economist.  Most Americans grudgingly admit that higher gasoline taxes could be used to improve transportation infrastructure in the U.S., but there are even broader implications:


Petrol prices in America are substantially below levels elsewhere in the rich world, and this is almost entirely due to the rock bottom level of petrol tax rates. The low cost of petrol encourages greater dependence; the average American uses much more oil per day than other rich world citizens. This dependence also impacts infrastructure investment choices, leading to substantially more spending on highways than transit alternatives. And this, in turn, reduces the ability of American households to substitute away from driving when oil prices rise.

There are any number of good reasons to raise the petrol tax rate. The current rate no longer brings in enough money to cover current highway spending... But a higher tax rate would also diminish the possibility that a sudden rise in oil prices would throw the economy into recession. That would be a nice risk to minimise! And yes, higher tax rates would hit consumers just like rising oil prices. But those prices are rising anyway; better to capture the revenue and use it, all while improving behaviour.

It's hard to take any fiscal hawk seriously so long as this measure isn't on the table. It's as close to a win-win solution as one is likely to find.