The use of metal in bookbinding 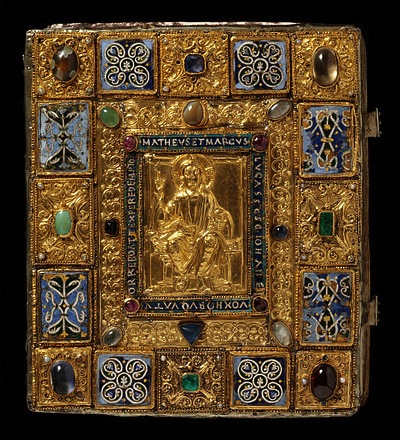 Excerpts from an essay by S. T. Prideaux published in The Gems Of Art (1895), and posted at Bookbinding.com.:


The high price of manuscripts throughout the Middle Ages, due to the scarcity of parchment, and the time and labour necessary for transcription, explains the luxury of ornament that decorated their outsides. The thick wooden boards -the weight of which was necessary to keep the parchment flat- were enriched with ivories, precious stones, engraved gems, plaques of gold and silver both engraved and filigreed, and the finest enamels. As the books were not often transported from place to place, indeed but little moved, the weight of their covers was not a matter of importance, and these were sometimes made to contain relics of the saints. To all such work the name Byzantine has been applied, probably from the fact that Byzantine art flourished and predominated over that of other countries from the fifth to the twelfth centuries. It has no meaning thus employed as a geographical expression, but is a general term applied to bindings composed of these arts of the gold and silversmith, of the enameller and ivory-carver, executed in the first thirteen centuries of the Christian era, and influenced in spirit by the art of the lower empire...

Of the three classes into which these very early bindings most naturally fall, ivories, goldsmith's work proper, and enamels, the gold and silver work -pierced, chased, or engraved, and often ornamented besides with precious stones.occupies the middle place, enamelled covers apparently originating when gems became rare...

This form of costly protection to the not less costly MSS. had itself in turn to be protected, and thus these books were often enclosed in boxes which were themselves sometimes the work of the goldsmith, or else in the outer covers of chevrotin, a thin leather or sendal, a rough silk, These coverings were termed in later times chemises, and sometimes chemises a queue, when there was a margin of stuff which, when reading, folded up on to the page and so allowed a hold on the parchment without the risk of soiling it with the fingers...

With the sixteenth and seventeenth centuries workmanship superseded the weight of the precious metals. The goldsmith of that time had to be sculptor, modeller, smelter, enameller, jewel-mounter, and metal-worker combined, and hence there is more unity about the metal-wrought bindings of that time than there is about the earlier ones. Indeed, an important point to be observed in connection with the Byzantine covers is, that they have not the unity that belongs to a single work of art. Portions of them made by different artists at different periods, and even in different countries, were incorporated in one cover, or smaller ones were subsequently adapted to larger volumes by resetting them in borders and so enlarging their capabilities. It is, perhaps, partly due to this feature that the term Byzantine has been applied to this mixed work, not wholly so much to express its connection with , a particular country or period, but rather to indicate a certain type, the characteristic of which is this admixture of materials often somewhat incongruous and rarely the work of a single hand, and which followed therein the example set by much of the art of Byzantium itself...

Those interested in this general subject matter might also enjoy the companion article, Embroidered Book Covers.  Image:  Sion Gospels book cover (~1140-50), from the collections of the Victoria and Albert.