On a recent family trip to Africa, spotting locals wearing T-shirts and baseball caps bearing obvious American brands or slogans became something of a parlor game... Were they gifts sent by a U.S. charity? Was this the ultimate destination for old T-shirts and hats donated to Midwestern clothing drives? Or did the Africans wearing them choose them from the small mountains of clothing -- some of it new, most of it used -- piled on tables and tarps at every market we visited along our journey?

In the parlance of foreign assistance, such donated clothing and other items is known as SWEDOW, which roughly translates to Stuff We Don't Want. The latest SWEDOW dump came in the form of a massive donation from the NFL to the behemoth Christian relief group World Vision... 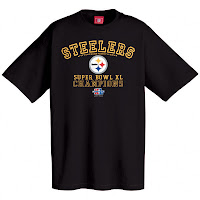 After the Pittsburgh Steelers lost the Super Bowl to the Green Bay Packers, the NFL was stuck with thousands of pre-printed T-shirts heralding the Steelers as Super Bowl champs. The league donated them to World Vision, which in turn plans to ship them to poor folks in Armenia, Nicaragua, Romania and the African nation of Zambia. ..

Some critics called a foul on the NFL/World Vision play, saying that while 100,000 brand new T-shirts to needy people abroad sounds like a lovely idea, it actually does more harm than good.

The NFL has valued the shirts at $20 apiece, despite claims from critics that the shirts are basically unsellable and therefore essentially worthless... "  This partnership is a win-win for both World Vision and the merchandisers. The merchandisers get to print 100,000 unneeded T-shirts every year without having to shoulder the full cost, and World Vision gets $2,000,000 worth of 'program costs' to improve their expense ratios. And they both get free PR with photos and news stories of happy people receiving the unsellable T-shirts."..

The NFL donation will flood local marketplaces with unneeded... goods, driving down the prices at which local merchants can viably sell their wares.

And it's not discussed in the article, but I'll bet the manufacturers of the worthless t-shirts claim a hefty income tax deduction for their "charitable gift."