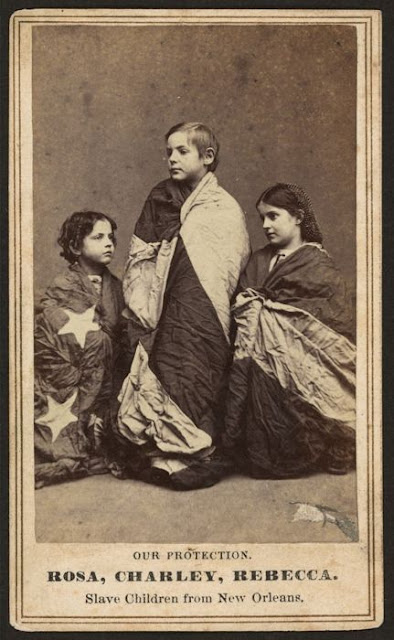 The photo is from a carte de visite in the Library of Congress, acquired in 1864, and described as follows: "Photograph shows freed slaves, Rosina Downs, Charley Taylor, and Rebecca Huger, each wrapped in a portion of the U.S. flag."

A search of the Library of Congress archives reveals quite a few additional photographs of these children, such as this one - 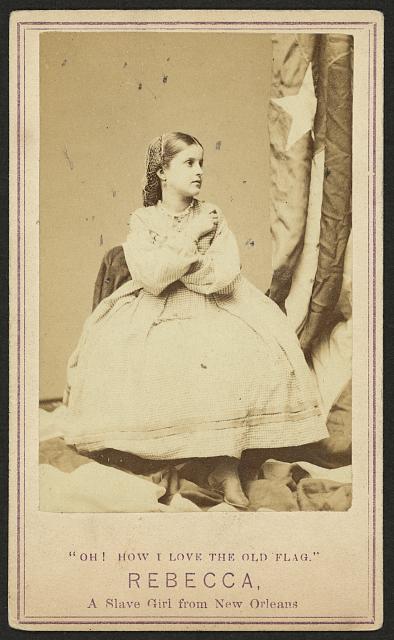 - obviously created as propaganda instruments for the abolitionist movement.  Some of the background story is presented in an article in Harper's Weekly (January 30, 1864):


Rebecca Huger is eleven years old, and was a slave in her father's house, the special attendant of a girl a little older than herself. To all appearance she is perfectly white. Her complexion, hair, and features show not the slightest trace of negro blood. In the few months during which she has been at school she has learned to read well, and writes as neatly as most children of her age. Her mother and grandmother live in New Orleans, where they support themselves comfortably by their own labor. The grandmother, an intelligent mulatto, told Mr. Bacon that she had "raised" a large family of children, but these are all that are left to her.

Rosina Downs is not quite seven years old. She is a fair child, with blonde complexion and silky hair. Her father is in the rebel army. She has one sister as white as herself, and three brothers who are darker. Her mother, a bright mulatto, lives in New Orleans in a poor hut, and has hard work to support her family.

Charles Taylor is eight years old. His complexion is very fair, his hair light and silky. Three out of five boys in any school in New York are darker than he. Yet this white boy, with his mother, as he declares, has been twice sold as a slave. First by his father and "owner," Alexander Wethers, of Lewis County, Virginia, to a slave-trader named Harrison, who sold them to Mr. Thornhill of New Orleans. This man fled at the approach of our army, and his slaves were liberated by General Butler. The boy is decidedly intelligent, and though he has been at school less than a year he reads and writes very well. His mother is a mulatto; she had one daughter sold into Texas before she herself left Virginia, and one son who, she supposes, is with his father in Virginia.

These three children, to all appearance of unmixed white race, came to Philadelphia last December, and were taken by their protector, Mr. Bacon, to the St. Lawrence Hotel on Chestnut Street. Within a few hours, Mr. Bacon informed me, he was notified by the landlord that they must therefore be colored persons, and he kept a hotel for white people. From this hospitable establishment the children were taken to the "Continental," where they were received without hesitation.

I'm sure much additional information can be found on this rather interesting topic.