These miniature cages are made from various materials and today, used as a way of bringing good luck into the home. In ancient days, the cricket cage was used for exactly what it sounds like – holding crickets. Although cricket cages do come in various sizes, on average, they measure about 3x4 inches.


Cricket Culture in China encompasses a 2000 year history of both singing insects and fighting crickets... We find a record of this kind of captivity in the book of “Kai Yuan Tian Boa Yi Shi” (Affairs of the Period of Tian Bao, 742-759 A.D.): “Whenever the autumn arrives, the ladies of the palace catch crickets and keep them in small golden cages, which were placed near their pillows so as to hear their songs during the night. This custom was also mirrored by common people.”

Most of the ladies of the palace were concubines to the Emperor. With emperors typically having three thousand concubines, their life was typified by a rich material life but starved emotional and cultural experience. A similarity can be drawn between the concubines and their captive crickets in their golden cages. Rather than enjoying the sweet chirps of the crickets, the concubines heard a reflection of their own sadness and loneliness in the cricket’s chirp...

During the Qing dynasty, the palace had professionals to take care of the singing insects in order to present these musicians whenever the Emperor or other high officers had some special occasions. (Meng, 1993). A very special Chinese art of handicrafting containers of varying characteristics was born with the requirements of keeping the singing insect pets in captivity. Of special interest to Western societies, good collections of various kinds of cricket cages and other utensils, especially those made from gourds and portieres, can be found in the Field Museum of Natural History and the Buffalo Museum of Science.

Much more at the link. Here's a photo of a Meiji Period Satsuma Cricket Cage, from Brian Kogan's Picasa web album: 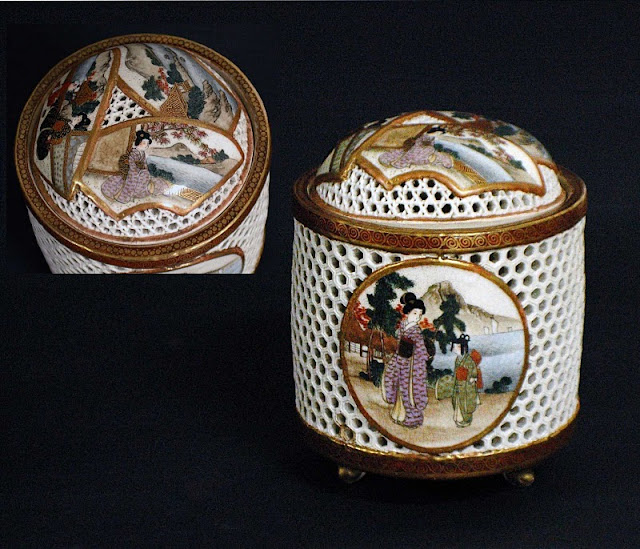