Good news re the Bamiyan buddhas 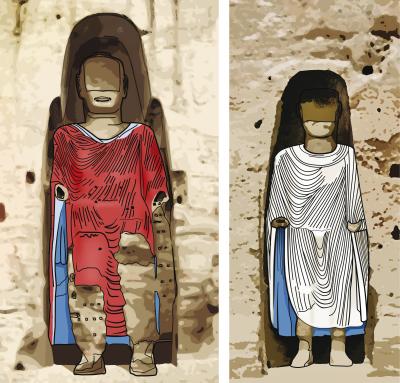 Some German scientists have indicated that it might be possible reconstruct at least one of them.  Excerpts from the article at PhysOrg:


Scientists from the University of Munich, in southern Germany, have examined fragments of the statues -- the world's largest Buddhas -- and concluded that the smaller one could be pieced together.

The two sculptures, 53 metres (173 feet) and 35 metres tall, had stood sentinel for 1,500 years in Bamiyan province before they were blown up by Islamists who believed them to be idolatrous.

Erwin Emmerling, the leader of the team sifting through hundreds of fragments, "considers a reconstruction of the smaller Buddha to be fundamentally possible," the university said in a statement...

Either a small factory would have to be built in the Bamiyan valley or some 1,400 rocks weighing up to two tonnes each would have to be transported to Germany. Japanese funding could reportedly be used to rebuild the sculptures.

They were once painted a variety of colours, the scientists said, including dark blue, pink, orange, red and white.

I didn't know these Buddhas had originally been painted (although I knew the Greeks painted some of their statuary).