Chess in the slums of Uganda 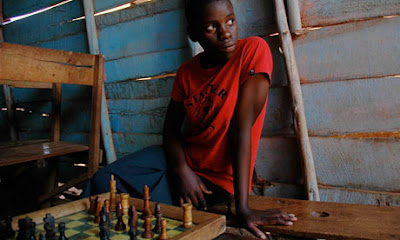 Excerpts from a story at The Guardian:


Phiona Mutesi is 15. She has just finished primary school and is still learning to read. Her family is so poor they have been evicted from tiny, rented shacks more times than she can remember. She is about as far as you could get from the typical chess player in Uganda – doctors, bankers, and their children who attend elite schools.

Yet Mutesi already has a strong claim to be the best female player in the country. Last September she competed in the World Chess Olympiad in Siberia as Uganda's No 2, the only girl in a team of university students and working women. On her return she triumphed in the richest and most prestigious local tournament, defeating the country's top-ranked player along the way...

After initial resistance from the chess federation, which had insisted that the national junior championships were for schoolchildren, but not "children from the streets", Katende was allowed to enter a team from Katwe in 2005.

For most of the children it was the first time they had left the slums.

"At the tournament they were isolated, and some of the other competitors thought they were dirty," Katenda recalls. "In fact they were wearing their best clothes and looking as smart as they could."

In 2007, aged 11, Mutesi entered for the first time. Some of her opponents were twice her age. She won the competition. She defended her title the following year...

"In Uganda chess has always been seen as a game for the rich, like golf," says Gali. "Now the kids from the slums are among the best players in country."

More at the link. Photograph: Xan Rice for the Guardian