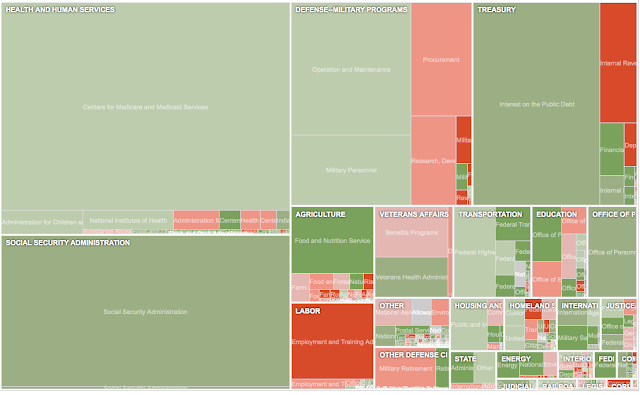 One thing I like about the New York Times is the ability of their staff to present complex data in understandable graphic forms.  That's true of this presentation of the proposed 2012 budget.  The colors depict which parts of the budget have been cut (red shades) or increased (green shades).

Don't rely on the embed above.  If this subject matter interests you, go to the interactive graphic itself, at this NYT link, where you can mouse over the components of the chart and zoom in for details.

I won't offer any personal commentary, but will cite a few passages from an article on this subject from the Washington Post:


Starting in 2014, net interest payments will surpass the amount spent on education, transportation, energy and all other discretionary programs outside defense. In 2018, they will outstrip Medicare spending. Only the amounts spent on defense and Social Security would remain bigger under the president's plan.

The soaring bill for interest payments is one of the biggest obstacles to balancing the federal budget, pushing the White House and Congress to come up with cuts deeper than previously imagined. Unlike with discretionary spending or even entitlement programs, the line item for interest payments cannot be altered except through other budget cuts...

The explosion of interest payments comes from a double whammy of economic factors. First, the nation's debt is growing faster than the economy. Second, interest rates are rising. Over the next decade, net interest payments will amount to nearly 80 percent of the debt added, an indication of how past borrowing is forcing the country deeper into debt...

...combined federal, state and municipal debt in the United States is at a record high, beyond the famous post-World War II levels. Unlike interest payments made then, however, a huge portion of interest payments are flowing to investors in other countries, draining funds out of the U.S. economy...