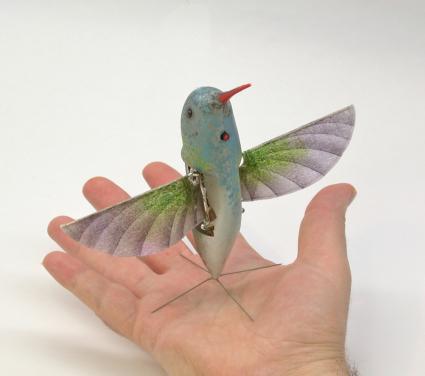 
Developed by the company AeroVironment Inc., the miniature spybot looks like a hummingbird complete with flapping wings... The ornithopter can fly into buildings under the control of an operator flying the spybot with the help of a feed from its tiny video camera. The prototype is capable of flying at speeds of up to 18 km/h (11 mph) and weighs 19 grams, which is about the same as an AA battery... The specifications given to the firm by the Pentagon included being able to hover in an 8 km/h wind gust and being able to fly in and out of buildings via a normal door.

The spybot was developed for the US military's research arm, the Defense Advanced Research Projects Agency (DARPA). The hummingbird appearance is intended to disguise the bot, although it would look decidedly out of place and would attract attention in most places in the world since hummingbirds are not found outside of the Americas... the final version is unlikely to look like a hummingbird, which is rare even in parts of the US, and he thinks a sparrow would be a better choice.

The US military has funded the project, giving AeroVironment around $4 million since 2006.

More details at Physorg, which also had a video showing the spybot and the view from its camera:

It's nice to know that, in the future, when the Predator launches a missile targeted at you, the spybot will have confirmed that your family is not nearby.