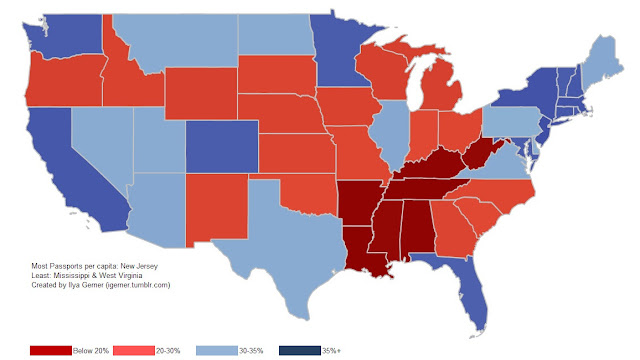 This map was posted at Political Language, with these comments:


As with every social statistic applicable to the US there are geographic disparities. I couldn’t find exact figures for states, so I extrapolated zip code-based passport issuance data from the State Department to create a choropleth map of globetrotting & stay-at-home America.

These are very rough calculations, better for comparison than exact figures. There aren’t many surprises. Alaska & Hawaii... weighed in at 44% and 33% respectively, New Jersey was the only state approaching 50%, and West Virginia and Mississippi tied for last place at 13%.

Additional explanation at the link.  Since this was described as a "chloropleth" map, I had to look that up:


A choropleth map (Greek χώρος + πλήθω ("area/region" + "multiply") is a thematic map in which areas are shaded or patterned in proportion to the measurement of the statistical variable being displayed on the map... Choropleth maps are based on statistical data aggregated over previously defined regions (such as counties), in contrast to area-class and isarithmic maps, in which region boundaries are defined by data patterns. Thus, where defined regions are important to a discussion (as in an election map divided by electoral regions), choropleths are preferred...

Technical aspects of the color schemes at Wikipedia.

Email ThisBlogThis!Share to TwitterShare to FacebookShare to Pinterest
Labels: other, sociology