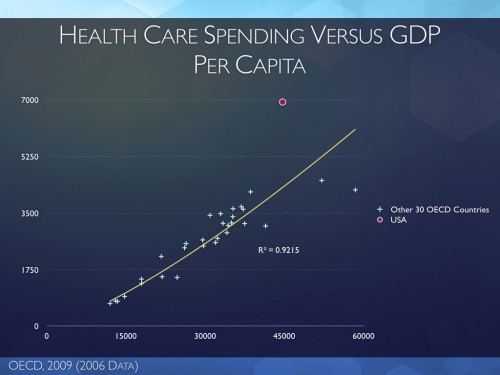 It should be intuitively apparent that in "richer" countries, health care will tend to be more expensive, but this graph from The Incidental Economist shows the huge degree to which the United States is an outlier:


The 30 non-US OECD countries line up in a pretty good line, with increasing spending per person as their GDP gets higher. In fact, as I show in the chart, you can make a pretty good line that fits the relationship between GDP and health care spending...

It’s not that we shouldn’t spend more than other countries. We should. We are richer than almost anyone, and we should spend more on health care. The problem is that we’re spending so much more than everyone else, even after taking into account our GDP. We’re literally off the chart. And we’re not getting better outcomes for that money.