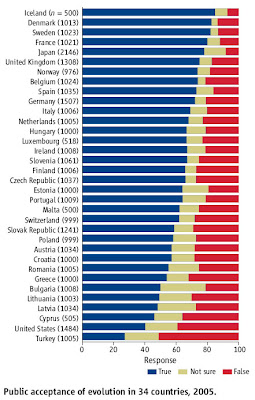 Adults were asked to respond to the statement: “Human beings, as we know them, developed from earlier species of animals." The percentage of respondents who believed this to be true is marked in blue; those who believed it to be false, in red; and those who were not sure, in yellow.

The only countries that tend to rank lower than the United States in accepting evolution are Muslim countries (lower graph). Opposition in the Muslim world is not based on any specific passages from the Koran, but on a variety of social/cultural implications.

Because the idea of an ancient Earth is not controversial among Muslims, he is comfortable presenting biological creationism in a universe billions of years old. Instead, the focus of his opposition is on the social and cultural threat posed by evolution in the form of materialism and atheism.

One final gloomy note: over the past 20 years the percentage of American adults accepting the principles of evoluation has declined from 45% to 40%.