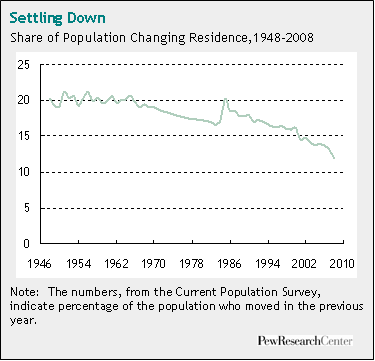 Fewer Americans than ever before are moving from state to state. That's the surprising finding of a recent Pew Research Center survey. And it's not just the current recession; this is a steady trend dating back essentially for the past 60 years (and undoubtedly before that). The data is discussed at the link (though not the reason for the blip in the early 1980s).

The bottom graph, from the same study, shows that over half of Americans have never lived outside their current state. I've lived in eight different states, so I must be way out on the tail end of the curve.

Finally, if you go to their interactive map (and click the tabs), you can see data for each state, including inmigration and outmigration and net migration over several time periods. Interesting data.