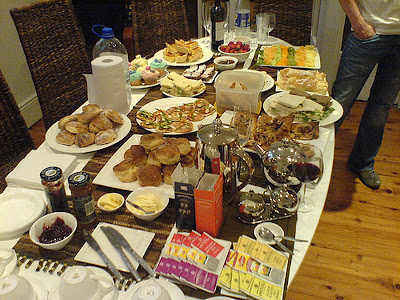 A murderer who cannibalized his victim is now on parole, and has a job as a restaurant food critic.

Everyone has seen the cute Ninja Cat video. Someone tried to reproduce it with his own cat, resulting in a not-so-stealth-cat video.

Three men have been arrested in Tennessee after they used an ax to cut off a dog's head, then skinned the dog and were eating it when the sheriff's deputy arrived. The leader of the group said told deputies he had "just carried out God's plan."

The Australian government has declared that identical twins are not related. This is bureaucracy at its best (which is why the item was blogged at Arbroath).

That bizarre knife attack on the children in the Belgian creche? Preliminary reports are that the perpetrator was painted like and emulating Heath Ledger's Joker character on the anniversary of Ledger's death. There are some very, very weird people on this planet.

A candidate for the "world's worst mother" has been charged with a felony after her 29-year-old son was found lying in his filth with maggots and flies, the bone protruding from the decubiti, and the legs fused together and fused to the bed.

Here is a panoramic photo that is 100 meters long, depicting people walking on a bridge in Berlin. You can scroll through it and see that there are some "interesting" looking people in Berlin... I believe the title "We're All Gonna Die" is just a "memento mori" reminder, not something more ominous.

A 17-year-old Argentine girl has already had 7 children. Duggars, watch out...

An immense compendium of common errors in the use of the English language.

Taking money from a collection plate is a childish prank. Taking millions of dollars to fund expensive homes and gambling trips to Las Vegas is another matter.

Cleaner air in the United States is threatening the tropical rain forests of the Amazon.

Josef Mengele may be responsible for an "astonishing number of twins" being born in a village in Brazil.

When the Titanic went down, many Britons died "because they were polite," while the Americans...

After the 1.5 million people gathered in the Washington Mall for Barack Obama's inauguration, Washington D.C. police reported that no one was arrested for any offenses. That's quite amazing, really. There is a superb photo gallery at Boston.com's The Big Picture.

Frogs are being eaten to extinction, with approximately a billion being consumed each year, including in school lunch cafeterias.

Here's a step-by-step guide on how to make your own haggis. Please don't show this to my wife...

It may be possible to test Galileo's eyes by doing DNA tests on his exhumed remains.

Wasps can be trained to detect chemicals, explosives, or whatever you want them to find. It's cheap and they can be trained quickly. They can pick up scents at concentrations as low as one part in a thousand billion, which is a hundred thousand times weaker that the concentrations detectable by commercial "electronic noses."

A photo gallery of abandoned planes.

An 80-year-old man saw drug dealers on his lawn. He got his gun and went out to confront them and scare them away. They shot him four times, once in the back, and he died. They were undercover policemen who had come on his property trying to bait drug offenders.

The secret of the sound from Stradivarius violins may lie in the fact that the wood was treated with certain chemicals, including "borax, fluorides, chromium and iron salts."

A re-enactor in a Civil War battle scene was shot when another re-enactor accidentally fired a .44-caliber ball from an 1860 Army Colt pistol that was supposed to be empty.

If you're going to camp out in Africa, make sure your sleeping tent is large, so the animals can see it at night. Don't be like stupid Rudy, who was trampled by a hippo...